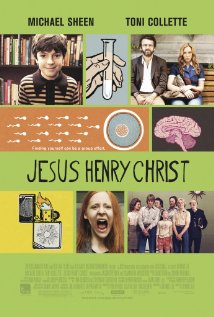 Jesus Henry Christ is a quirky title – true to the nature of the film; a film that I feel is somewhat under-appreciated.  Director Dennis Lee‘s 2012 film, starring Jason Spevack in the role of a ten-year-old boy genius, is a refreshing take on growing up different, defying uniformity while still trying to fit in.

The film’s  narrative is filled with ingenious humor and plot twists that kept me glued to the screen through the whole ninety-two minute length of the movie. The humor is not lame or even as silly as one may expect from a light-hearted comedy-drama.  Instead, the whimsical situations and sarcastic overtones bring back reminders of the classic Coming-of-Age flick Forest Gump.

Thanks to the unusual plot devoid of any clichés, one never knows what will happen next. When things do happen, they make sense – evidencing a skillful editing technique added to the ingenious screenplay. Admittedly one has to forego a bit the sense of disbelief at times but, unlike Disney’s The Odd Life of Timothy Green,  doing so actually results in an enhanced and enjoyable viewing experience .

The actors, both young and old, generally deliver solid performances.  An exception is the young Samantha Weinstein, in the role of a bullied and rebellious teenager, who I felt was really annoying at times. While the annoyance is likely related to her character, rather than the actress, she is the only actress in the film I failed to appreciate. True, you can’t expect to get emotionally involved with any of the story protagonists, and this actress’s failing should  not prevent your enjoyment of the film.

I have no hesitation to recommend Jesus Henry Christ. While it’s not the best Coming-of-Age comedy of 2012 , I guarantee that it won’t bore you.