Jimmy Bennett is an astounding young actor. Born on February 9, 1996 in Seal Beach, California, in my opinion, the 14-year-old is one of the top young actors today. He has accomplished more in his fourteen years than most adults. Jimmy has appeared in seven television shows and in twenty-eight movies. One of the things that sets Jimmy apart from others is the fact he knows what he wants to do in life.  He goes after parts and, no matter how big or small they are, he puts 110% into everyone. He is an excellent role model for any aspiring young “wannabe” actor.

Another thing that makes Jimmy stand out from some young actors is the fact that he is versatile in the roles he plays —  comedy, action, thrillers, you name it, he does it. I remember him in his first movie, Daddy Day Care, as Flash — wreaking havoc everywhere — and I have not stopped watching him since. I like all the movies he stars in, but some of my favorites are Shorts, Trucker, Orphan and Star Trek (even though his part in that only lasted about five minutes  when he  steals a car and takes it for a ride while jamming to some music and eventually drives the car over a cliff ).

In Shorts he plays Toby “Toe” Thompson, in a movie that is about a rainbow-colored rock that will grant wishes. It makes its way around town in while people make petty wishes with the rock. Toe and his friends try to retrieve it to make things right. A very funny movie, in my opinion. In Trucker he plays Peter (see the review of Trucker, below, for more details). In Orphan, he plays Daniel Coleman. The plot in this one has Daniel’s family bringing an orphan into the house and she begins to terrorize and kill anyone she feels threatened by. Daniel dislikes her right at the start but soon is forced to keep the girl’s secret. If you like thrillers,  this one is for you.

I am looking forward to seeing Alabama Moon which, as of this writing, still has not been released.  Bones is in post-production and The Return of Captain Kidd is in pre-production. You can’t go wrong with any of his movies and I recommend all of them. Next time you’re out, pick up one of his movies. I know you will enjoy it. Be sure to leave a comment and let me know some of your Jimmy Bennett favorites. 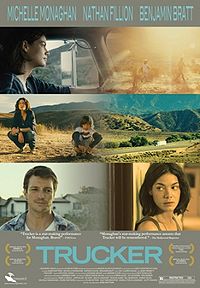 This is an independent film by James Mottern starring Jimmy Bennett as “Peter”. I always enjoy films with Jimmy as he can play any role. In this film, Peter’s dad is in the hospital with cancer. His dad, needing a place for him to stay, sends him with a friend and he shows up at his mom’s door without warning. This gets their relationship off to a rocky start, to say the least. His mom is a trucker and has only one care in the world– herself.  She doesn’t want Peter there and Peter is not too thrilled about it either. They butt heads right off the bat. Once he does finally make it in the door, his mom makes him sleep on the couch after a few choice words.

The next day, not having anything else to do with Peter, she takes him on the road with her.  When they stop for gas, she tells him to stay in the truck. Well, that certainly doesn’t go over well with Peter.  He doesn’t like being told what to do and,  knowing his mom doesn’t want him there in the first place, doesn’t help any). When she gets back from paying for the gas, he is gone. She starts running around acting all crazy-like, trying to find him (she always has this psychotic look on her face). She finally finds him sitting out in a field. She grabs him and smacks him on the butt and yells at him that someone could have taken him (the first sign that she might actually care about him).

Battles like this go on throughout the film. Peter starts school and joins a baseball team. He doesn’t know much about playing and his mom tries to help him learn to bat. It doesn’t go over well as she ends up hitting him with the ball and he takes off after her with the bat! At his first game, he misses the first two pitches, then hits the third to centerfield. The other team catches it, but Peter doesn’t care and runs the bases anyway. This is the first time he is actually happy and his mom is happy for him.

After one of his games, they visit the hospital and he finds out his dad is not going to live. Peter, of course, doesn’t take the news well and, surprisingly neither does his mom. She still doesn’t want Peter staying with her, but she finally comes to terms with it. In the end, she comes home and Peter is sleeping on the couch as usual.  She picks him up and puts him in her bed. Peter awakens,  rolls over, and asks her if she wants him to stay or go. She says “stay”. In turn, she then asks Peter the same question and he says “stay”.  I have to admit, the ending got to me — I thought it was a great ending.

This film is not very long,  but it has a lot in it. I always look forward to any films that Jimmy plays in, as he never fails to please. Note that this film has a lot of strong language in it, but this is definitely a film you don’t want to miss!

We have a total of 409 movies in our library, regrouped in 18 genres .

TheSkyKid.com features articles and reviews of coming of age movies, music and books with a focus on adolescent development and on young people in the performing arts