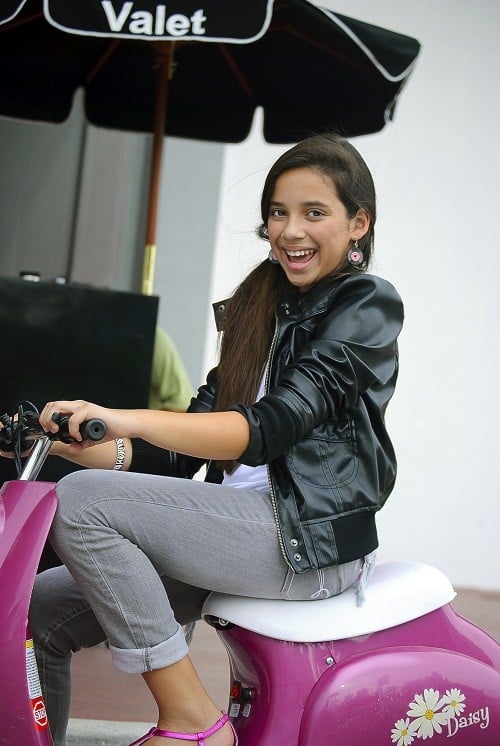 Katia Nicole is 11 years old and lives in Homestead, Florida. Her parents are from Puerto Rico and are of Colombian decent. She started off her performing career as a competitive cheerleader for several youth teams in Florida. As she got older, she decided to audition for the Miami Heat Jr. Jams, and made the team. Thereafter, she auditioned and also danced with the Florida Marlin Minnows, which is a group of youth dancers who perform at all the Marlins Sunday home games during the baseball season.

At nine years old, Katia began dancing at Paramount Dance Studios in Homestead, where the director and founder,  Lianna Beckno, saw her passion and talent and gave her a solo. She competed and won many awards while at Paramount,  not only as a soloist, but as a group member as well.

When she auditioned the first year at the Miami Heat Jr Jams, in 2007 she did not make the team. She realized that these kids were trained in all styles of dance and she needed to push herself to get to their level. She joined a dance troupe called the Untouchables, that was lead and directed by Glenn Douglas Packard. At the Untouchables she met Jessica Fernandez, who became her private instructor and mentor. Through her trainings and teachings, Katia quickly learned an aggressive approach to modern and lyrical dancing. When she tried out the following season for the Heat Jr Jams, she made the team and other teams thereafter. At the present time, Katia dances at Xtreme Dance studio of Miami, which is led by founder and director, Denise Amores. With that program, she’s learned all styles of dancing and has won many awards in different competitions.

Katia is an eager young lady who is determined to become a triple threat (someone who can sing, act and dance). She has recently landed roles in six student university films and was nominated for Best Actress at the Miami University Film Festival this past year.

She has also appeared on different television programs such as Sabado Gigante (Univision), Aqui Todos Ganan, Showtime and recently landed a role on Burn Notice. Aside from these programs, Katia has earned recognition from different charity events such as American Cancer Society, Susan G Kolman, and many others.

Katia was featured in a couple of music videos from Lil Chuckee and Lil Twist, to Jayquan (a friend and loyal supporter). She’s also done many live performances in and around Miami, and has also performed in New York City and in Philadelphia.

She is now working with different music producers who are helping her realize a music career. Katia is determined and has set her mind on one day becoming a Disney Channel Star.  In all her endeavors, she’s supported by her loving family. Katia is also a straight A student, and will now be attending a Magnet Program in Miami, Fl.

Katia, who also goes by the nickname “Kat”, will touch and inspire many kids. Her motto is always the same “If you believe that you are a star, then it’s just a matter of time until you belong in the sky”.

TheSkyKid.com would like to thank Katia’s mother for providing the information for this article.