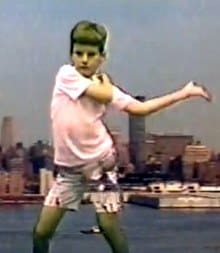 Tribute to Madonna – the VOGUE BOY

Childhood memories. I stumbled upon a great video on Vimeo that was shot in the 90s and puts to shame the viral clips of today. In the video, Robert Jeffrey shares a recording of a dancing performance he did at nine-years-old to the music of his favorite singer — Madonna.

I have rarely seen someone dancing with such enthusiasm (exceptions of course are the performances of  Marcel Pietruch and George Sampson). This video got picked by various media such as The Huffington Post and Jezabel and I could not resist doing a blurb about it for this site. For one, I am absolutely sure that you will be watching it on repeat (as I have) and will move to the beat while watching it.  It’s impossible not too.

Thanks to Robert Jeffrey for posting his childhood clip to share with the world. I wish I had a camera back in those years, in my own life,  but my personal memorabilia only features some photos. Here are the details about the Vogue Boy told in his own words:

“I performed to MADONNA’s “VOGUE” in the Summer of 1991 when my parents took me to Hampton Beach Casino in Hampton Beach, New Hampshire.  A business in the casino at the time gave tourists the chance to lip-synch to their favorite pop songs in front of a blue screen background, and I was lucky enough to partake that summer.”

“VOGUE BOY”: ME AT NINE, PERFORMING TO MADONNA IN SUMMER ’91!

On the 6th of June, 2012 Robert Jeffrey wrote an article in his blog in which he shared further insights about his Vogue Boy video and linked to a variety of creative remixes that fans have created. Check them out!