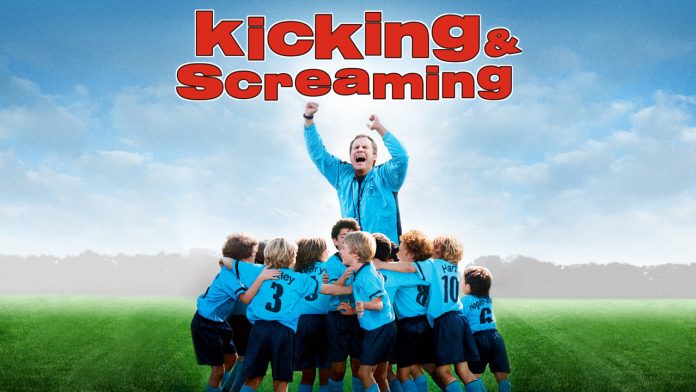 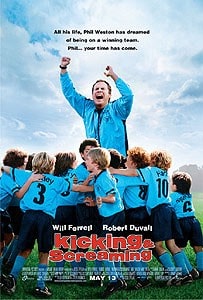 Many coming of age films about sports has a similar theme – boys on a team who are last in the standings and who are motivated to succeed by their coach.  The coach mentors them and, as they get better, they become determined to succeed.

So that by the end of the story, one can hardly recognize the once wimpy team – a miracle happens, and they reach the finals and sometimes even become champions. In the meantime, the young players (and the film viewers) learn valuable lessons, such as the importance of believing in themselves and that nothing is impossible ….

All sports films are alike,  right?

Kicking & Screaming won’t surprise those who have seen films such as Carlitos y el campo de Los sueños and Teufelskicker. This film is just as entertaining as those good flicks, with tasteful humour, jokes and situations that will make you laugh out loud.  The film is a bit harsh on the soccer skills of American boys.  But in America, as is the case everywhere else,  there are some outstanding players.

In Kicking & Screaming, though, in the beginning, the team is made up of all American boys, and they are dismal, to say the least.  Then the coach spots a couple of boys who are to become the “Tigers”  team stars.  They happen to be two Italian brothers, who don’t even speak good English, but who seems born to play the game.  At the first practices, they easily outperform everyone else on the field. 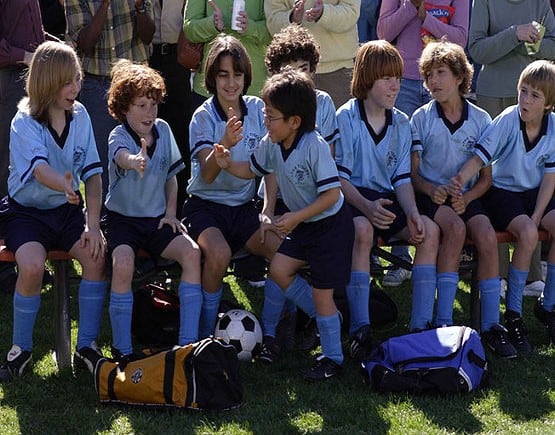 At one point, I wondered if that’s the right way to show how soccer is played.  After all, it’s a team game, and each member of the team contributes to the game with his own unique skills. Yet, as the action develops, I started to feel the director’s intention – so the final result was a film about a young sporting team in which the action develops in reverse. The coach knows that the only way to win with the team he has is to “get the ball to the brothers.”  And that’s the strategy, the rest of the team uses their limited skills to pass the ball to the Italian brothers who consistently score goals.

Overall, the film is fun and enjoyable.  But as with most European films involving young athletes – White Palms and Buitenspel, for example – the sports-minded fans will appreciate the film’s plot more than the average movie-goer,  as it’s about their favourite games. The viewer needs to keep in mind that Kicking & Screaming is a comedy, and it’s good at that.  Whether you enjoy this film or not will depend on your expectations about it. Based on the soccer theme,  I was getting ready for a real sport treat,  but instead got a lovable comedy — a film which is great for spending some time with your friends.

The film’s directing was fine, but the editing has several problems – which really are not such a big problem if one doesn’t look at the film as anything more than pure entertainment. As was the case with the German film Teufelskicker,  Kicking & Screaming will be enjoyed mostly by a younger audience — twelve and under. If you are long past that age,  don’t be surprised if you suddenly get the desire to take your son out and kick some soccer balls around. Yet, even if the film is primarily a comedy, it is an inspirational one, and that’s a big plus for its overall rating. It’s a funny film with a lovely cast, which will be appreciated mostly by comedy lovers.