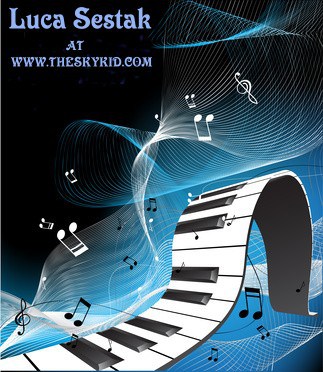 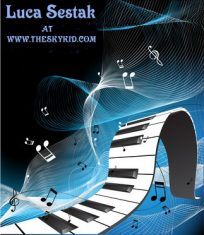 On theskykid.com site we have featured actors, singers, dancers and filmmakers.  Now we are happy to introduce a talented musician – Luca Sestak from Germany.

He plays piano and is so incredible at what he calls his “favorite hobby”.  Not long ago, the film producer, Stephen Ryder, mentioned Luca in a conversation, raving about Luca’s performances on YouTube. Stephen is an avid piano player himself and was really impressed and suggested that theskykid.com do an article and/or an interview with Luca. A quick glance at his “Boogie Woogie “ performance on YouTube was all it took to convince us that Luca`s talent is exceptional.  So theskykid.com went ahead and contacted Luca for an exclusive interview.

Theskykid: Hello Luka and thank you for agreeing to this interview.

Let me first compliment your excellent piano skills.  I was really moved by your classical performances (Rachmaninoff, Schubert, Bach) and could not help clapping and even dancing a bit while listening to your energetic performances in the Boogie Woogie style. Would you share with us what attracted you to the two music styles you play – the classical music and the Boogie Woogie genre?

Thank you very much! Originally, I didn’t want to play piano at all. My father forced me (luckily) to practice. However, that didn’t help and this is why he sent me to a piano teacher. That’s where I learned, with rather little enthusiasm, the first songs and techniques. It was only thanks to the pressure from my piano teacher and from my father that I didn’t quit. But after two years I played a Beethoven Sonata which suddenly I liked. But my love of the classics was soon pushed aside by the Blues and Boogie.

Theskykid.com:  In the biography published on your site, you write that when you first started playing piano it was because your dad made you – and you did not like it back then. But now, you are enjoying it greatly as one can see by watching you perform in the clips available on your YouTube channel. What changed your attitude towards the piano as an instrument?

In the beginning the piano didn’t mean all that much to me, but now my heart jumps whenever I see anything resembling a piano. Back then the piano was very one-sided to me which was perhaps because I knew only the classics as a musical direction. Today I know what all one can do with this unbelievably versatile and wonderful instrument. But I would still say that it is the direction of music that really changed my life. Music is music, a Blues is a Blues regardless of what instrument I discover it on.  But I play the piano which, I believe, is best suited to me. My ideas and my style can best be realized on this instrument.   However, I began to play the guitar and to sing some time ago. It was also my father who convinced me of the guitar. Since I heard Vince Weber for the first time I absolutely wanted to sing because that, I believe, gives so much “Fire” to the music.

Theskykid.com: You’ve made your own web site. Is that another hobby of yours – web design?

Yes! It took a while to learn HTML but it’s worth it. I love to develop my own homepage using programming language, but it takes a lot of time.

Theskykid.com: Judging from your events calendar, you are quite a busy lad, with quite a few concerts scheduled.  What are your concerts like? How does the audience respond to your music?

That always depends on the audience.  I love it when the audience feels about the music the same as I do and isn’t too shy to clap with it, which is a great feeling. But when I play at company gatherings or similar events it’s often not so exciting because I’m playing only as a background musician. But most of the time the audience is still enthusiastic, dances, claps and participates. I hope to give this “old” type of music new momentum.

Theskykid.com: While looking at the picture gallery on your site, we noted that you have played with other musicians – such as during the Boogie Woogie “Summer Special” Session Münster im “Krug”. Is that something you’d consider doing in the future – being in a band?  Or do you see yourself strictly as a solo performer?

It is something very special to play with other musicians. With the Blues one can immediately begin to “jam”. I really enjoy playing with a band, but first I would like to concentrate on myself.

Theskykid.com: There is a “Tips & Recommendations” page on your site on which you list various books, CDs and soon will also include “Practical Exercises and Tips”. It’s an excellent read and it was suprising to see such an open approach from a young musician. If asked for the single best advice you could give to a young pianist who might be reading this interview, what it would be?

That’s a difficult question. I would say: You have to love the music that you make and you have to practice, practice and practice.

Theskykid.com: You’ve done so many wonderful performances on YouTube. Are there any plans to release an EP or a CD in the near future?

Yes, absolutely! I’ll publish my first CD this year. Now during summer vacation I’ll concentrate mainly on the recordings. If someone would like to help or sponsor me with my CD production, he can write me at info@piano99.de. I’d be really happy about that. Of course sponsors will appear on the cover of the CD when it is ready.

Theskykid.com: Do you think that you will make music a career?

I don’t know that yet. In any case, I would love it. First I’ll do music on the side and I’ll see how that goes. Maybe I’ll switch later and I’ll do it professionally. But I will certainly never quit.

Theskykid.com: Although you are very professional now, do you get nervous when performing in public?

Always, but in a positive sense. I’m always, especially before large performances, in a very good mood and want to begin immediately. But with classical music it’s often worse. Then I’m always rather excited. That’s also why I love Boogie and Blues so much. Everything is so loose and free.

Theskykid.com: What do your parents think about your “fame”?

They think it’s wonderful and are very supportive, for which I’m very grateful to them. I believe that without them I wouldn’t be where I am now.

Theskykid.com: Are you parents musical? Who is the person who so nicely films your performances that are shown on YouTube?

My mother plays no instrument contrary to my father. He plays, or more accurately, played the piano. He is also the one who always takes the videos of me.

Theskykid.com: What do your fellow students at school think of your talents?

Oh, Luca, you and your Bogie! But initially they are enthusiastic just the same, but then one hears this comment more frequently when I say: I’m sorry, I don’t have the time, I have a performance to do. It doesn’t bother me at all. Of course, one can impress girls with a slow ballad very well too ;-)

Theskykid.com: Do you give any performances at school?

Sometimes. But I don’t run after the school when they have summer concerts or some such. However, in October I will, same as last year, participate in the Culture-festival because I was asked to perform. 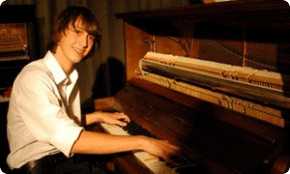 Theskykid.com: It’s kind of unusual for a young person to like blues and boogie.  Who introduced you to it?

That was a complicated thing. I have an E-piano at home into which one can insert disks. It had a demo disk when it was purchased. I inserted that at some time and listened to it. The first piece was Carl Philipp Emanuel Bach’s “Solfeggietto”. At the end there was a jazz piece which is what enthused me so. I asked my father what that was and he said: Jazz.  Since then I practiced that piece before school, after school, late in the evening, and before going to bed. Finally I searched the Internet for Jazz and came upon the Blues. And from the Blues finally to Boogie Woogie. The first Boogie-Woogie I saw was by Daniel Paterok whom I was able to meet personally two years later.  That was a great feeling for me, of course, to meet the one who originally fascinated me so much.  I still remember sitting in front of the PC and thinking “Wow, that sounds wonderful!”

Theskykid: Is there anything else you would like to add?

I would like to thank all those who help me with my music.  Particularly my parents, my wonderful piano teacher Mrs. Melber, my good friend László Széchényi, who always translates my stories so nicely into English, the YouTube users who look at my videos and write their comments and all those who visit my homepage.

And of course, all those who keep this music alive. The Blues will never die! By the way, my last name is of Czech origin. My father is from the Czech Republic and came to Germany 40 years ago.  I think an American Congressman has the same name. I don’t know whether he is related to me.