The Mystery Artist Show is a weekly program on radio at TheSkyKid.com. Each week Jeffrey, the program’s host, introduces a young artist from somewhere around the world. At the end of April 2012, TheSkyKid.com radio aired an exclusive interview (conducted by Jeffrey) with Razvan Dobai,  a talented young singer from Romania. From early childhood, Razvan has participated in numerous festivals and competitions in his native country of Romania. 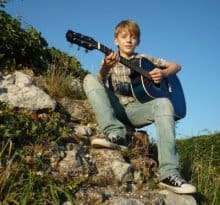 When I finally received the answers from Razvan to be able to put the show together, his mom told me that he had re-recorded his answers several times because he wanted to make sure that everything was just right, since his English isn’t that good. I wouldn’t consider this as being a perfectionist, but rather someone that takes pride in what they do to make sure everything is just right.

Note: This interview is transcription of the original interview aired on TheSkyKid.com radio. The clip included below features the whole interview and snippets of the songs that were played during the live broadcast.  In this transcript, “TMAS” will represent the questions posed by the Mystery Artist’s Show and “RD” will be Razvan’s answers.

TMAS: Hello Razvan and thank you for agreeing to this interview. You are a boy of many talents.  What made you decide to go completely with music?

RD: Now I can’t say I’ve decided to devote myself completely to music.  At the moment, school is more important to me because I am expected to do an exam in summer.

TMAS: If you could sing a duet with any famous artist in the world, who would you want to sing with?

RD: If I could, I would sing a duet with Michael Bublé.

TMAS: Other than the piano, what other instruments do you play since some of your pictures show you with a guitar and in the video Fairytale you’re shown playing the violin?

RD: I did three years of piano and I’ve just taken up guitar lessons. And the violin you saw in that video I used as a prop. We shot the video after a contest where I had to imitate the original artist as well. Fairytale is Alexander’s Rybak song, and he plays the violin. I just imitated him.

TMAS: Since I had never heard the song before Razvan had sung it, I decided to check out Alexander’s song. After listening to both sing the song Fairytale, I’ve come to the conclusion that I much prefer Razvan’s cover of the song over that of Alexander — even though it’s Alexander’s song.

TMAS: With having been in so many festivals and won so many prizes and awards, is there any award that you’re striving to receive that you haven’t been able to win yet?

RD: I’m not an awards hunter. I enter music contests to gain experience and, if it happens I win, any award is most welcomed.

TMAS: If this isn’t humble then I don’t know what is. This goes to show that Razvan is truly in this for the pleasure of performing and is not letting things go to his head like so many artists that become corrupted by the fame.

TMAS: What kind of advice would you give other young artists such as yourself?

RD: I want to say to all young artists not to give up even if they might have some difficulties. 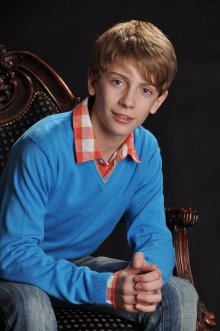 TMAS: I couldn’t help but notice that in about half of the videos you have posted, the songs you sing are in English. Is there any particular reason why you decided to start singing in English?

TMAS: Growing up, I’ve always been told that the English language is one of the hardest languages there is to learn. So I was really surprised when Razvan said that it was easier for him to learn the lyrics in English than in his native Romanian.

TMAS: Most young artists generally cover songs by well known artists. Granted, I don’t know about the songs you sing in Romanian, but what made you decide to cover England’s Declan Galbraith’s Tell Me Why, the Netherlands Ralph Mackenbach’s Click-Clack and Canada’s Justin Bieber’s Never Say Never?

RD: Because she liked my singing a lot, a lady told my mother about Tell Me Why by Declan Galbraith, so I chose to sing it. With Declan I went easily from songs for children to more serious ones. So I sang the song Angels for the first time (Declan Galbraith’s version) and then I sang Robbie Williams’ version. Ralph’s song (it was recommended to me by my teacher) I chose to sing because it is a happy one. I had noticed the song Never Say Never a long time ago, but I sang it first at the request of a friend who needed someone to deal with the rap part of the song. After that, I have decided to sing all the songs by myself.

TMAS: Who would you say are some of your biggest influences in the music industry?

RD: I have not been influenced by certain singers … I learn something from each and every one of them.

TMAS: Where would you like to see yourself in about 10 years?

RD: In 10 years’ time I see myself singing in a club or restaurant and, why not, having concerts on the big stages of the world. I would also really want to have my own studio.

RD: I want to thank you for the invitation and hope everyone will have a good day and enjoy listening to music on The Skykid.com radio!

If you want to find out more about Razvan Dobai – consider visiting the article about him on Rivenmaster.com titled : Razvan Dobai Terrifically Talented Teen