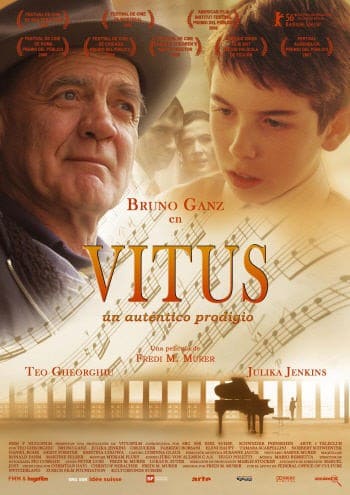 Vitus is the story of an amazing child prodigy with an IQ that is off the charts at 180. Before Vitus is old enough to go to school, he is already accomplishing things that astound every adult who comes in contact with him.  At the age of six, he enjoys his reading directly from encyclopedias and discovers the meaning of words like “paradoxical” directly from the dictionary — completely on his own.

Due to his overwhelming interest and passion for the piano, he excels beyond his teacher’s ability to instruct him, and of course finds it increasingly difficult to be challenged academically with children his own age.  After being booted out of one school due to outshining a teacher, he is continually advanced to higher grade levels with students with whom he has nothing in common due to the drastic difference in age.

While you may think it would be wonderful to be so advanced intellectually, Vitus finds his genius to be a curse at times and only seeks to be normal.  His parents love him dearly but his mother is consumed by her own ambitions for Vitus to become a concert pianist, and his father is continually absorbed in business affairs. This leaves Vitus feeling conflicted and hopelessly lost.  Because his friends and relationships are limited, he finds his greatest ally and friendship in his grandfather who seems to be the only one who really understands him.

To reveal any more of the story would make this review a spoiler.  Let’s just say that Vitus finds a very unusual way to escape the trap that he finds himself in, and still manages to utilize his genius to not only improve his life but his entire family’s as well.

The acting in this movie is superb and I especially found myself captivated with both boys who played the lead role of Vitus:  Fabrizio Borsani (age 6) and Teo Gheorghiu (age 12). Both boys are natural in their portrayals of a youngster advanced in communication and intellectual reasoning.

Director Fredi M. Murer has done a great job using camera close-ups to draw the viewer into the movie, and in other ways encapsulating the film’s audience into the story rather than leaving the viewer only as an observer.  The writers have created amazing dialog and a thorough characterization of Vitus, producing a character who is both witty and intelligent, but also passionate and loving.

The film is produced in the German language but subtitles are available in several languages.

I highly recommend this film if you have not seen it.  It’s an uplifting story that  makes you laugh at times, and it will find a place in your heart long after you have watched it!  It is rated PG and is suitable for the entire family!

Rivenmaster’s Place has become the global home to young signed and unsigned vocalists, aspiring young actors and talented youth.  You will enjoy outstanding articles that are derived from speaking directly to the parent of the child and also personal interviews with the young celebrity. Many young people have been given even greater opportunity to expand their careers due to the dedication and effort of this site! For more information visit: Rivenmaster’s Place. Or write to: writemeone@hotmail.com