I really liked “Saint Ralph “. It is great movie full with inspiration. Ralph is a fourteen years old teenager who choose to chases his own miracle – winning the Boston’s marathon. He believes that since people say that such achievement will be a miracle – his mother will wake up from the coma. It is a drama movie and as such there are quite a few scenes which can evoke emotions in its viewers. 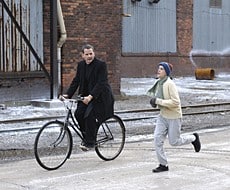 The movie starts with a fun scene in which Ralph is having something to confess – what – well he is a teen and have teen “ sins “ . I like the attitude of Ralph – the way he handles girls for example, or accusations …etc. He is a cute kid as well – and probably one of the reasons for me liking this movie is that I somehow relate to him.After all I have been in the Cross Country Team while studding in the States and when I was his age I took part in many running competitions. You should have seen me watching this movie, as another reviewer (samurai2347) wrote “I was cheering Ralph on as much as the other characters in the film were.”

The soundtrack was really good – and the music contributed to the overall good impression that the movie leaves. Looking at the storyline – I find similarities with Billy Elliot, trough of course this movie has its own uniqueness.