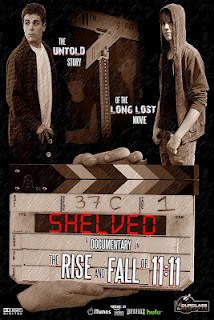 Don’t feel bad if you haven’t, as we just found out about it ourselves a few days ago thanks to an email with a copy of David Boyne’s article  titled Happy Accidents: The Film About A Film That Never Was. The  article appeared to be a publication at the IndieSlate Film & Video Magazine and led us to a press release of the Independent Film Production/Distribution company Hourglass Pictures.  From it we have learned that the film telling the story of two boys experiencing reincarnation through the 11:11 phenomenon has been in the making since 2004, but won’t be released (not for the time-being anyway).

Instead, an extensive  “making-of” documentary titled  SHELVED: THE RISE AND FALL OF 11:11 will tell the story of the film’s creation, the issues that the filmmakers had to address and the experiences of the young actors Darian Weiss, Austin Thomas and Myles Jeffrey during the film-making process.

Naturally all this heightened our interest in the original film.  We found an intriguing trailer and a set of promotional video clips available on YouTube.

The trailer intrigued us enough to make us sorry that the movie has not been released after being seven years in production. Yet, we could not help but wonder what the target audience is for a documentary “making of “.

Traditionally,”making of” documentaries are made after the release of the main film – often included as a new Director’s Edition of the film (as it was the case with Dave Schultz‘s 2011 release of Jet Boy). 11:11 director, Rocky Costanzo, included a statement in the company press release in which he states that the documentary will  give the audience something in return for their patience. So we have a potential target group – the people who knew about 11:11 and were anxious for its release. Having seen the promo clips of the documentary, we think that it would have appeal for anyone with interests in independent cinema, film-making and the Coming-of-Age genre in particular.