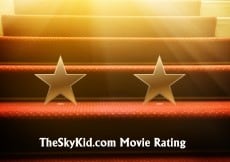 I must confess. When I first watched this film, late one evening, I did not understand much. But then I watched it again in broad daylight and also read some about it and after that I understood much more. The Annunciation is a movie based on the play The Tragedy of Man, written by the Hungarian writer Imre Madach and first published in 1861. The play itself is often compared to the 17th century English poet John Milton’s Paradise Lost. Even if the film is entirely performed by children, it is very seriously done indeed. 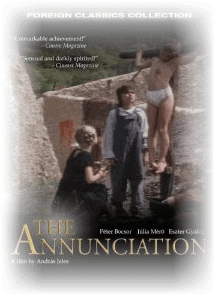 The story begins in the Garden of Eden where Adam (Peter Bocsor) and Eve (Julia Mero) are tricked by Lucifer (Eszter Gyalog) to eat of the forbidden fruit, and thereby get knowledge of good and evil.  For having committed this sin, they are then cast out from Eden by God. Now Adam reminds Lucifer of his promise to let him know “everything”. Lucifer then lets Adam fall asleep and have a dream of the future history of mankind. In every part of history, he lets Adam be a known character, starting with Miltiades in ancient Athens, then Tancred in Byzantium, Kepler in Prague, Danton during the French Revolution in Paris and, in the end, a nameless man in Victorian London. Guided by Lucifer, Adam is taken through the horrors of human history. In the end, Adam wants to jump from a cliff to spare the world from mankind, but is stopped by Eve.  And God tells Adam that his task is only to “strive on and have faith”.

Going through this film is not that easy since it’s a bit lengthy for what it wants to accomplish. The dialogue is quite interesting, the words are whispered rather than said out loud. The style of the dialogue is quite interesting also – it is like watching a visual poem.  There is a phrase that is repeated many times during the film and if you paraphrase it one would get a pretty good idea of the film – “We exist and yet we don’t exist”. The movie is quite popular, but one could always say about it “It exists, yet it doesn’t exist”. Another quotation from the film is “Everything is beautiful, good and rightful. Only people consider one thing to be rightful and another thing unrightful.” If you think about it, there is so much wisdom in those words. Some say that this film is kind of unusual and spooky – yet it really shows what human kind has become in a way. In that sense, the movie could be seen as quite an interesting journey through the history of mankind. Others say that they can’t seem to catch the overall message of it.

Ever since its release on DVD (2007), the picture quality has not been that good, with bleak colors which are pale and sometimes unsharp. The sound is not top quality either.  It simply doesn’t impress much. Some scenes also seem to have been over cast a bit. Most of the scenes in the film are quite surreal, and it must have been quite challenging for the young actors to understand them.

Some say they don’t miss this flick in their collection, others that it is an interesting though challenging movie. With almost all the cast being children, it is quite unusual in respect to its rather serious topics and should therefore perhaps have a special place somewhere among the other coming of age movies.

Note : This review is result of the joint efforts of myself and two other reviewers.