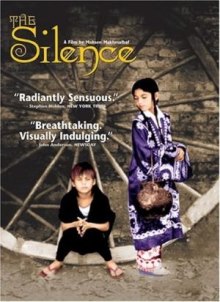 Throughout the years, I have reviewed Coming-of-Age movies from across the globe. Yet, Mohsen Makhmalbaf’s film The Silence is the first Iranian film I’ve seen. Interestingly enough, the censors banned the film in its own country. Since I lack knowledge of the social and political environment in Iran, I won’t be discussing the ban and the reasons for it but will let you know that the movie is perfectly suitable for audiences of all ages and even recommendable to anyone who favors art house cinema and innovative storytelling.

The protagonist of The Silence is Khorshid,  a ten-year-old blind boy. The father left his mother years ago, which necessitated that Khorshid had to work to help raise money for the rent. Being blind, the young boy has developed an extraordinary sensibility to sound, which helps him get a job tuning musical instruments at a workshop in the nearby town. He is assisted by a slightly older girl who works at the same workshop to get there.

Some may find it quite disturbing that kids as young as ten have to work to support their families. But, during a trip I made to Turkey, I witnessed many children working on the streets and in shops there. It was explained to me that, in Turkish society, working forms an essential part of education, and the children take pride in being able to help their families. In the film, Khorshid does not have a choice as the landlord threatens to throw his mother and him out if they don’t pay the rent they owe him.

The Silence is a poetic film. It is one of those films that one not only sees –  but experiences. The dialogue is brief and much attention is paid to the sound. By this, I mean that it is not a soundtrack the viewer focuses on but, alongside Khorshid, the viewer is challenged to hear the beauty of the everyday sounds that surround him –  flowing water, a bee’s buzzing , the passing automobiles, the windblown leaves falling from the trees.

Scene from The Silence

The film’s visual aesthetics are extremely pleasing to the eye and the mind. The frequent use of extreme close-up shots of Khorshid’s face, and the people and objects with whom he interacts, helps the viewer identify with the little boy, while the sounds allow us to imagine the world as he experiences it. This allows us  to notice otherwise insignificant events and moments that we are accustomed to ignore in our daily lives.

Mohsen Makhmalbaf’s film has something of a documentary feel to it and, as it was shot on location, it allows us to peek into the daily life of Iranian society. I wonder if that might be the reason for it to be banned in that country? The story is simple, the ending vague. But as Alfred Hitchcock stated when describing the characteristics of Italian neorealism (many of which The Silence shares): “The spectator derives pleasure, not from the importance of what is sought, but from watching the quest.” [1]

The Silence is a distinctly different film which I enjoyed immensely. Yet, its uniqueness may make it less appealing to those who are used to challenging plot twists, special effects and swift action. But if you are looking for a distinctive cinematic experience, The Silence is a film for you.

Previous articleThe Willies (1991)
Next articleShelved: The Rise and Fall of 11:11