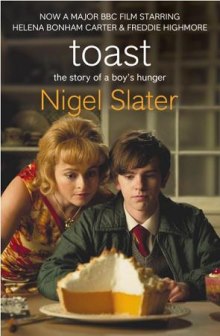 Freddie Highmore was the initial reason I chose to view the DVD of Toast. His performances in the 2004 film Finding Neverland and 2005’s Charlie and the Chocolate Factory made a huge impression on me (and apparently many others, as he is frequently referred to in reviews as one of the best young actors of recent years). I did not realize that Freddie’s appearance in the film was limited to the last 20 minutes in the role of the grown-up Nigel Slater, a young boy whose Coming-of-Age story is told in the movie.
I was deceived by the DVD cover on which Freddie was featured led me to believe he had a more featured role.

One would think that such a discovery would disappoint me, but the charming story – filled with optimism and humor (along with some dark moments as well) – and the incredible performance of Oscar Kennedy as the younger Nigel Slater grabbed my heart. Oscar, being a newcomer, is certainly not the most well-known or experienced actor in the film. Other actors such as Helena Bonham Carter or Freddie Highmore are certainly more prominent veterans of the big screen. Yet Oscar handles himself in such a professional manner that I couldn’t find a single fault in his acting. In addition, Oscar even looks like Freddie Highmore did at his age.

The plot of Toast is adapted from Nigel Slater (he is an English food writer and journalist) memoir of the same name in which he recalls his childhood – his “story of a boy’s hunger”, which is to be taken both literally with regards to food (Nigel’s mother was such a  disastrous cook that most of the family meals ended up being canned food or toast with butter), and also metaphorically with regards to the struggle for the recognition and acceptance from the young hero’s distant, uncaring father.

Rarely have I experienced such sensual storytelling during which I did not feel at all manipulated by the filmmakers, but moved and entertained throughout. It did not come as a surprise when I found out that Billy Elliot screenwriter Lee Hall was involved in the production (you may also recall his work in the 2001 drama Gabriel & Me which, combined with the success of Billy Elliot, gives him a certain prominence in the Coming-of-Age genre).

The film’s story is set in the 1960’s and the sets, costumes, and even the music bring that special nostalgic sentiment typically reserved for some of the best Coming-of-Age classics. A lot of attention has been paid to detail, and some scenes were even shot at the Black Country Living Museum (an institution that pays tribute to the people who once lived in the heart of industrial Britain). It’s BBC perfectionism at its best! 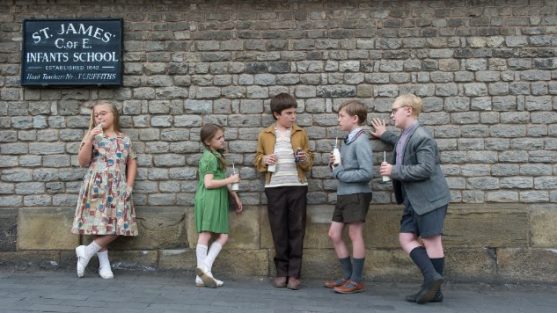 Scene from the BBC movie Toast

The film editing, montage, and camera work (with its numerous point-of-view shots) draw attention to the story without distracting the viewer with unnecessary gimmicks one often finds in independent, made-for-TV production. Since Toast’s story focuses on the development of a refined taste for food and interest in its preparation by a young boy, the food – a character in the film in its own right – is shot in such a skillful, glamorous manner that you better have a good meal before you start the film, or else its tempting look will further boost your involvement with the story.

The Coming-of-Age value of the story is to be found in Nigel’s journey to independence and acceptance – even for his own feelings regarding sexuality and attraction to the same sex. I have to warn you that some may find the Wolverhampton accent spoken by the actors (intended undoubtedly to boost realism) hard to follow without subtitles. At least that was the case for me. But having watched so many foreign films, the subtitles hardly presented a hurdle to my enjoyment of the film.

Not being from the UK, I am not familiar with the television appearances of Nigel Slater,  the person whose story is told in the film. Yet, after watching the movie, I can’t wait to experience the book that it’s based upon and further immerse myself in his captivating story.

Did I like the film? No. I LOVED it and so will you!

Toast (2010)
In short
Set in the 1960’s, Toast is the Coming-of-Age memoir of Nigel Slater, an English food writer, journalist and broadcaster. Did I like the film? No. I LOVED it and and so will you!
5
Our Rating
WHERE TO BUY
Amazon
Previous article
Come Morning (2012)
Next article
Western Lights

Facebook
Twitter
WhatsApp
Set in the 1960’s, Toast is the Coming-of-Age memoir of Nigel Slater, an English food writer, journalist and broadcaster. Did I like the film? No. I LOVED it and and so will you!Toast (2010)
TheSKyKid.comYoung talent in the movies and the arts