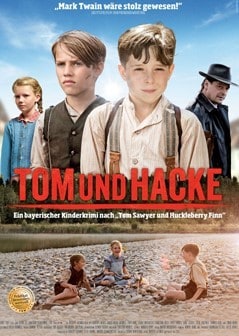 Adaptations based on classic novels do not always inspire enthusiasm to be seen on the big screen. More often than not, such films fail to capture the essence of the works they are based on. The different medias, the cinematic potential of the original work, length and depth are just some of the challenges that are faced by the filmmaker.

Director Norbert Lechner manages to address all of those challenges in his 2012 film Tom und Hacke, loosely based on Mark Twain‘s novel The Adventures of Tom Sawyer.

The sheer number of television and film adaptations of Tom Sawyer’s adventures confirms the cinematic potential of the novel. But how many films based on the same novel can one see while still enjoying the action in them? Wouldn’t the predictability of a narrative resulting from such familiarity ruin the viewing experience?

Norbert Lechner and screenwriter Rudolf Herfurtner found an intriguing solution to the previously mentioned challenges by placing Tom and Hacke in a completely different time and setting. The fictional town of St. Petersburg, Missouri is replaced by a small town in Bavaria (Germany).

The time is also shifted by about 100 years forward to just after the Second World War. Those creative shifts allowed the director to imbue the film with a story and atmosphere of its own while still successfully capturing the overall tone and spirit of Mark Twain’s novel.

The story is distinct. After the war many families in Germany struggle to bring food to the table. For Aunt Polli (who is a beautiful young lady in the film – instead of the elder character we know from the book), raising her son Loisl (Yannick Kuhl) is tough enough, but she doesn’t think twice about taking Tom (Benedikt Weber) under her wing. Tom, who has nowhere else to go, is a mischievous lad full of energy and boyish curiosity. He hangs out a lot with his best friend Hacke (Xaver-Maria Brenner). One night the boys witness a horrifying crime – murder. Scared, the boys swear each other to secrecy …and an innocent man is to take the blame.

If you love the novel of Mark Twain, you will recognize many of the events and characters, though they are presented through a unique cinematographic prism.  Undoubtedly most of one’s viewing pleasure is derived from the different manners and narrative nuances in which the story is told – familiar, yet distinct enough to keep one engaged for the 90 minute duration of the film.

The plausibility of the narrative owes a lot to the immaculate choice of settings and the overall set design – including both the props and the costumes (leather pants for the boys, fancy dresses for the girls). My overall impression is that the German setting feels a bit sterilized in comparison to its American counterpart.

Hacke appears much more tame than the rebellious Huckleberry Finn we all know, and Tom’s cuter and not as tough as one imagines him from the novel. Yet the German Tom and Hacke have their own appeal thanks to the natural charm and ease with which the young Benedikt Weber and Xaver-Maria Brenner portray their characters. Both actors made their debut in this film and both managed to portray sincere friendship and boyish bravado.

The musical score and sound effects perfectly suit the film and remind one of the American mystery series for children and teens The Hardy Boys, adding to the suspense in some scenes. Most of the dialogue is in Bavarian, which presents a challenge even to native German speakers. However,  most international audiences are likely to enjoy the film aided by English subtitles. Oddly, with my limited German language skills, I was still able to catch a phrase every now and then.

Adults will enjoy Norbert Lechner’s Tom und Hacke largely for its creativity and nostalgic value. Young viewers will most appreciate it, however, enjoying Tom and Hacke’s adventures and readily identifying with the young protagonists — even if they have not yet read Mark Twain’s classic. Friendship, courage and the possibility of the triumph of good over evil: sure ingredients for a captivating story for the young and the young at heart.