The first album of Vox Angeli was released few days ago (February 4, 2008) and it seems that it has gained popularity judging from the the amount of visits to this blog only due to the fact that I have bookmarked their official site . I will admit that until recently I was not familiar with the group Vox Angeli but knew about one of the six soloist in it – the young and very talented Louis-Alexander Désiré. Louis sings the Schubert’s Ave Maria solo which is featured as the sixth song ( out of ten) in the album. I had the chance to listen to all songs and am really impressed – the music is really touching and one easily can see why the name that the name of the album and the group is a right tag for the angelic voices of the girls and boys in the group. Actually I guess the more appropriate term for Vox Angeli would 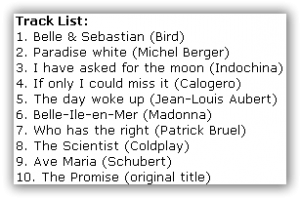 be choir rather then group. Finding information about them in English is not an easy task – even their official web site is French only – which is a pity as it somehow it sets some limits to people who want to learn more about them. Vox Angeli has 6 members – 3 girls – (Lola, Iris and Claire) and three boys (Mathis,Louis and Etienne) – I have created a small collage for this post so you can have an idea who is who ( of course they do have biographies on their official page ). I have read opinions which compared them with Angelis same formation and similar image and I could only wish them to become at least as popular as Angelis are- because they really deserve that.