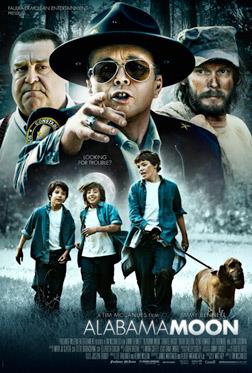 “Just before Pap died, he told me that I’d be fine as long as I never depended on anybody but myself.”

Having read the opening quote of this review, you may think that you already know the kind of film this review is going to be about. But I would suggest that you read through the entire review, as everything is not always as it seems.

Moon Blake (Jimmy Bennett) is an eleven-year-old boy who lives with his father in the deep forests of a national park in Alabama. They live in isolation, as the father is obsessed with the idea that the government wants to control them and their lives. These days, this doesn’t sound like such a ridiculous idea, when one thinks of the extremes to which some governments are willing to go to establish various surveillance mechanisms and techniques aimed at increasing their power over the people under their jurisdiction.

One unfortunate day, Moon’s dad breaks his leg (in what probably is the most dramatic scene of the film) and dies from the infection a few days after.  Left by himself, Moon decides to follow his father’s instructions and head to Alaska (or some other rural state) in the hope of finding other people who live in the wilderness to avoid the government. Unlike the book by the same name, written by Watt Key, the film leaves a lot to be desired in the portrayal of the forest, the wilderness and extreme isolation in which Moon and his dad spend their days.

During the first fifteen minutes, the film manages to build a tension and a real interest in its viewers with an intriguing story, touching scenes, and unanswered questions (such as why Moon’s dad chose that way of living and will his son be able to manage on his own). However, instead of the high quality survivalist drama I was prepared for, the film transforms into a rather naive adventurer’s tale filled with humor and moral lessons such as the importance of friendship …etc.

A local policeman (Clint Howard) captures Moon, thus proving in his own eyes that the “law is indeed after him”. The boy ends up sent to Pinson, a boys home, where he is to remain as the “property of the state” until he becomes eighteen years of age. In Pinson, Moon meets his first ever friends – Hal (Gabriel Basso), a bully who he first has to fight to prove himself worthy of acceptance, and Kit (Uriah Shelton), a sickly boy fascinated by the adventurous aura surrounding Moon. Together they devise a plan and manage to escape the boys home, only to find themselves on the run and chased by the police. 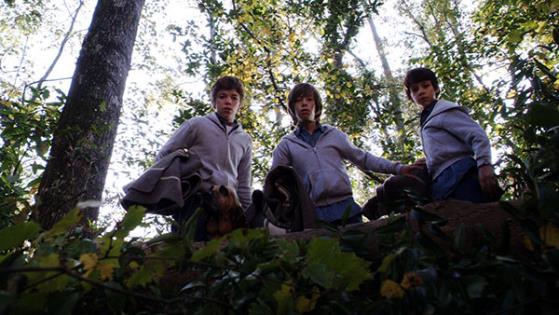 Through the film is enjoyable and will appeal to a younger audience because of its adventurous spirit, the genre transition from drama to adventure is not a good one.  I actually even felt cheated when the wonderful and powerful drama I thought the film would be, transformed into a “Disney–like” adventure film. If the film stuck to one genre, it would have done well as both a drama and an adventure. But having mixed the two genres, I’m glad the Coming-of-Age subplot at least remained constant to provide some measure of remedy for my disappointment.

The story is told from the point of view of its main character, Moon Blake.  Jimmy Bennett did a decent job as Moon, though I would agree with some reviewers on IMDb who pointed out that, if one wants to get a real sense of the talent of this young actor, they would be better off watching the 2008 drama Trucker, in which Jimmy Bennett delivers a truly powerful performance. The most impressive acting in Alabama Moon is carried out by another young actor, Uriah Shelton, in the role of Moon’s friend Kit.  In fact, one could probably justify watching the film just on the basis of Uriah’s natural performance alone.

Even though the genre change disappointed me, I ended up enjoying the film and don’t hesitate to recommend it to you. And now that you’ve read this review, you are unlikely to be misled by the first fifteen minutes of the film and will just take it as an enjoyable adventure with Coming-of-Age elements and humor.