ROMP and ROLL! In an era of Hip-Hop, Rap and R+B, this young German school band from Ulm has chosen to follow the path of Rock‘s pounding rhythms. At the tender ages of  12 and 13, they have already made a name for themselves with their performances in Southern Germany and Italy. Their debut album, which has nine songs for the price of only five euros, reveals sounds that are classic Metal Rock bordering on a rebellious punk style. In April 2012, they released their debut album, Going to Get Bigger, which surprisingly features only two songs in German; the rest are with uncomplicated English lyrics. The boys are Flo who does the lead vocals, Joni on guitar and Dani (who joined in 2012), on drums.

Read on for an overview of the songs included in Going to Get Bigger: 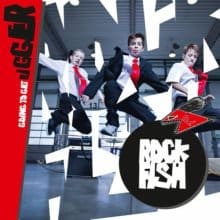 Exciting for me personally is the originality of their songs, which already reveals an emerging creativity. Gute Zeiten (Good Times) is a short character song about Rainer and Didi, respectively called an old sack and a fat sausage. It shows a practiced coordination between the instruments and a new generation viewpoint.

Like A  is a curious driving School of Rock type song with lyrics that show the boys have been paying some attention in English class. The lyrics may be primitive, however the confident vocals and practiced lead guitar have a tight sync that is impressive. “I hate the dark place — I hate the school”. Their basic English will no doubt improve with time. In Sisters are Terrible, there is once again only a simple message about sisters and brothers animosity, but this song has a wailing lead guitar, a bridge with synthesizer effects and a nice pace change, all of which show the band is learning to add to their repertoire of sounds.

Riff of Rockfish is a kind of AC/DC banner song with some introspection. The group’s driving self-confidence is apparent here. It’s about uniqueness in their quest to success – doing things that others don’t attempt. It’s a kind of self-stamped image assertion: we are special – we are confident!! Some vocal modifications work nicely here.

We Love Rock ‘n Roll snares out with an even more impressive lead guitar line that augments with skillful Wah-Wah and echo effects. It has some lyrics that point right to the heart of what Rock is about. “Make my money with the bass” and “Like to see the people jump”. 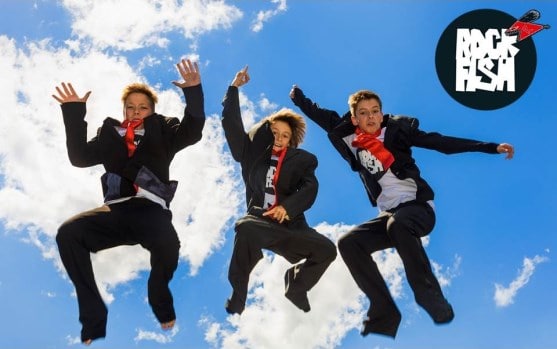 Rockfish already has the capability to really drive home a subject in style as is apparent in I‘m a Devil. The song is about hiding from a bad old man and the opening is huge in the tradition of classic big sound ’70s  Rock anthems.

Stormbreaker also has some intriguing images of a man standing outside in a storm trying to lure a youngster away with him. The tune has traces of bands like ZZTOP or BOSTON and ends a touch repetitively. Noticeable about these songs is that they are fairly short, mostly around three minutes.

Scheissregeln (Crapping Rules) is far too repetitive for my liking, but it does have some fine guitar licks. It may be about resenting rules in general or just the rules of  meal and toilet. But it’s cheeky crude and there‘s a flushing toilet and fart to end it.

The song Lonely Road has a further sound addition – the track of a police hunt in the background, which works well. The lead guitar line is great here and echoed by the bass at the end. It’s about looking for excitement, but the limited English vocabulary is a slight deficit here.

Rockfish will no doubt get much bigger in Germany soon since this fresh raw sound has been popular in Germany in the past. The boys have completed a series of concerts in southern Germany this summer and played at the Spirit of Woodstock Festival in Maupuri, Italy in July. They have been writing new songs during their summer holidays and will be in the studio recording this Fall.  Stay tuned to new events on Facebook or listen via Soundcloud. I‘m pleased to have discovered this young band with great potential through George (aka SkyKid).  Their homepage is www.rockfish-ulm.de/

Alles gute, my best wishes in future—rjm for the skykid

More articles by the author