If there was one thing that was most frustrating about watching Step Up 3 last year, whether it be the 3D version or otherwise, it was the fact that there were moments that were magic about it that were almost immediately contradicted or overwhelmed. You could see that Director Jon Chu had latched onto something, at least for a fleeting moment, that was like catching lightning in a bottle  – – but there just wasn’t quite enough in the story to propel the film past a few moments of grace and charm.

While I typically avoid any sort of comparative analysis in a review of a single film, I mention this to begin the case for Never Say Never and may need to resort to it again to make a point. Chu is, in fact, the perfect candidate for this project.  Despite what he hasn’t been able to accomplish with some other films,  here the story existed and it’s the kind of thing you can’t make up.  He absolutely nailed it as far as making it a piece of narrative cinema.

Absolutely stripping away any notions you may have ( pre-conceived or otherwise) about Bieber’s music, this film is quite amazing and exhilarating and that has every bit as much to do with the crafting of the film as it does with the narrative it relates.

So far as the crafting is concerned: the edit of this film is very well done. The story itself  is framed as a countdown to one show, Madison Square Garden, but it is told neither chronologically nor does a majority of it take place there.

As the production team has protested in the  months leading up to the film’s release,  most of the film is not a concert, hence it’s a little misleading to label it a concert film. There is concert footage, of course, but rarely is a full song included. What’s most incredible is that all the songs are placed perfectly within the film.  Just watch and listen to the tempo and the lyrics in conjunction with the flow of the film.

As much concert footage as there is, Never Say Never doesn’t end up being about the show at MSG, but about Bieber’s journey getting to that concert mecca. And it’s definitely not a one-sided tale. It tells things both from the perspective of Bieber and his team, and compliments that with man-on-the-street interviews with his fans.  Justin Bieber is someone who has been launched to such astronomical heights thanks to the fervent devotion of his fans and by his management team’s careful guidance of his career.  So it makes sense that the film illustrates how each of these ingredients have led to his great success; they have been combined into one tale, as they truly are one.

That is where this film separates itself from the other two recent teen sensation films (Miley Cyrus and The Jonas Brothers).  Never Say Never is a personal chronicle and the concert is not the thrust of the film, but rather serves as its climax. Whereas, you saw some goofy we’re-trying-to-show-how-we’re-like-the-Beatles scenes in the Jonas Brothers’ film, you didn’t learn anything about them or their journey. On the other hand, Never Say Never puts you both in the position of the performer and that of the audience, almost simultaneously, which is quite a feat.

As if further evidence is needed that this film isn’t about the concert, there is a star-studded line-up of guest performers (including Miley Cyrus herself in a duet). This doesn’t detract or elevate things —  it just fits right into the mix. 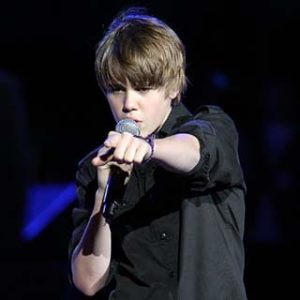 Neither is this a completely skewed depiction of the performer either. There is a part of the film — which propels the film towards its climax with stakes raised and playing almost like it was scripted — wherein Bieber is fighting off a throat infection and swollen vocal chords just before the MSG show.  His vocal coach asks him if he’d been straining his voice outside the performances and he, of course, responds “No”. This is followed by a quick, funny montage hearkening back to a short layover he had in his hometown, where he’s yelling and gallivanting with his friends.

Like almost anything Bieber does, the film doesn’t take itself or its subject, too seriously.   It shows him, as much as a film can in this format, as a real person.

In the end, many quick flashes of home video and the YouTube clips that began his story are quickly spliced into the last musical performance of the film and hint at the completion of the journey. The journey concludes in a frame wherein an anonymous user is linking their friends to his videos and hence the viral machine starts. There is also some very creative use of graphics displaying YouTube comments, tweets, titles and subtitles that also gave the film a little more cinematic leverage.

Watching this film, again based on a comparison with the other two, was like being at a concert. It was virtually the same atmosphere. That alone should say something. It’s easy enough to dismiss this film as a crass money-grab if you want to.  But if you watch this and see it as anything less than a sincere depiction and a thank you to those who got Bieber where he is today, then you’re not watching closely enough.

This is a film that is exciting and exhilarating cinematically, if you give it an unbiased look and watch it  not just as a concert film, because there’s so much more to it than that. It’s the full story of this phenomenon about as well as it can be told. Kudos to Jon Chu and Paramount.

The review of Justin Bieber`s film Never Say Never is written by Bernardo Villela : A writer, director, editor and film enthusiast who seeks to expand your movie-watching options at his blog The Movie Rat