An Interview With Eric Gelb

One of the principal missions of TheSkyKid.com is to support young talent in music and the performing arts. That is why we were excited when thirteen-year old Eric Gelb contacted us.  Eric, as it turns out, wrote, co-directs and stars in Project X – a Musical — a production focusing on the Coming-of-Age experiences of four teens on their voyage to adulthood.  He started working with his best friend and Norup International School classmate Ryan Hurley on the full-length script of the musical in 2010.

The protagonists of the story have just entered Middle School and are struggling to fit in with their peers while trying to stay true to oneself. The issues tackled in the musical include peer pressure, popularity, friendship and making decisions. Those are just few of the numerous challenges children face during the Middle School years, a time of life when most of us learn a lot about ourselves – who we really are.

In Project X – the Musical, the story of teenagers is told by teenagers. The show is currently touring the Detroit area.  We caught up with Eric for an exclusive interview for the readers of the SkyKid.com.

Please Note:  For this interview, the questions posed by TheSkyKid.com will be shown as “SK” and Eric Gelb’s responses will be indicated by “EG“.

SK:  Hello Eric and thank you for finding time to answer to some questions about your project for our readers. When we received a note from you about Project X – The Musical, we were really impressed with the amount of your involvement with the production. You schedule tour dates, do merchandise sales, handle public relations, schedule photo shoots, do interviews, schedule meetings and design merchandise. For someone your age (and for many people much older) all of this is quite challenging. Tell us a little about yourself –  where you call home and what training you’ve gotten to prepare you to be an entertainer and do all the other things I’ve described above?

EG: That’s a great question. I am from Vietnam, but I am adopted and I live in a suburb of Detroit. In terms of training, the key word is “self-taught”. I mean I guess adults helped us in terms of like scheduling stuff at their venues, but we really started out from scratch. I was a figure skater for 6 1/2 years, so I guess that helped in terms of moving well. Accompanying that was a year of ballet and two years of conditioning (to improve stamina). Ryan and I both took three years of community theatre camp together. Ryan, however, sings professionally with the Michigan Opera Theatre Children’s Chorus – he has a phenomenal voice. I did some work backstage for some shows at our local theatre group Stagecrafters as well.

SK:  Could you briefly describe the story of Project X – the Musical?

EG: Well, Max, Brenton, Beth and Trish are all Middle Schoolers. Technically – today is their first day. They are all kind of concerned about what Middle School is going to be like and, of course, they are all worrying about the obvious (will they be popular, will they be liked, etc.) rather than their friends who have always been with them. The show is really about embracing yourself and staying true to yourself. 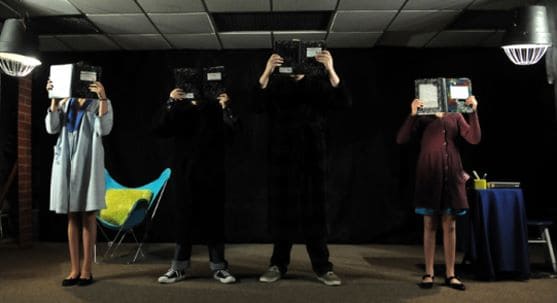 Who are we really?

SK: So the musical is about kids in Middle School and, at thirteen, you are a teenager yourself.  Did events from your personal life serve as an inspiration for the story?

EG:  I suppose you could say that, but ‘Project X’ is really everyone’s story. Everyone has been Max, who just wants to be popular. Everyone has been Brenton, who is seen as a nerd and talked down to.  Everyone has been Trish, the blonde.  And everyone’s been Beth, the goodie-goodie. Ryan, the other co-director, wrote it in such a rich and understandable form that you can watch the show for a minute and instantly say “Oh, that’s me, I’m Beth, I’m blah blah blah.”

SK: Why a musical? What led you to choose that art form to express yourself? 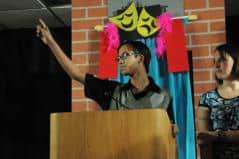 EG:  Well, I didn’t write the music – my friend did! But I didn’t really envision it as a musical at first, actually. I wasn’t sure how well the content would fit in a musical format. Would it turn teens away? Anyway, he kinda threw some stuff together and it just went from there. In terms of why, I think it would be because song is such a strong way to put your feelings out there.

SK: What’s your favorite bit of the show and why would you encourage someone to come and see Project X the Musical?

EG: There’s a ton of really great stuff in the show. I play the flashy, loud, sing-songy drama teacher in Act 2.  I kind of run in with this confetti and everyone loves it. The kids I think, love the voice. They love the fast talking, sweet sounding kind of thing, you know? And the adults find it hilarious. So I love any part of the show that involves me as Quincy. Everyone loves our show. We see 7-year-olds and 70-year-olds. Some cry, some give us standing ovations. Everyone can relate and really connect with our show and learn alot without really knowing it.

SK: Based on the nature of the content of the show, would you say the show would appeal mostly to a younger audience? Would it appeal at all to an adult audience?

EG: I would say that it really depends on what kind of person you are. Actually, during previews, half of our audiences were people from the 60+ group and they love it. The story is really timeless – everyone is going to or was in Middle School, so they can all relate. It’s a really funny show too.

SK:  What would you hope someone attending your show would take away from the experience?

EG: I would like to say that people walk away with a little more of a sense of what it’s like to be whoever is opposite you. If you’re popular, you see how to embrace yourself. If you are a nerd, you see how it will work out in the end for all the people who talk down to you. In Brenton’s song ‘WHEN YOU’RE THE NERD’, he sings ‘BEING THE NERD IN MIDDLE SCHOOL THINGS CAN BE TOUGH, KIDS CAN BE CRUEL, I AM THE NERD…BUT I’M PROUD TO BE THE NERD – YES I’M PROUD TO BE THE NERD.’ That’s Brenton saying “Hey, yeah, I’m not the king. This is who I am, and I am proud of myself. I really admire the character for that. That was something I could not do for a very long time.”

SK:  There are three more kids, other then you, in the lead roles of the musical. Would you briefly introduce them?

EG: Haha, I am actually not one the leads! Ryan, the co-director/co-creator plays Max, the wanna-be. Max himself is very insecure and needs ever so desperately to be liked. In real life, Ryan is my best friend. We can just look at each other and start laughing. It’s so much fun to be with him. He’s so goofy and it’s hard not to smile. Nicole plays Trish, the blonde…Trish is your ‘Elle Woods’ with a little bit of spunk. Nicole is a dancer and she has great stage presence. We’ve been friends since we were 4. She’s like a sister to me. Leah, played by Beth, is the smart one and is ‘sensible’ and never leaves an “I” undotted or a “t” uncrossed. Leah is the same – and she’s soooo funny.

SK:  Project X – The Musical is entirely done by teenagers. Yet, you must have had adults offering their advice to you and the other cast members.  What’s the best piece of advice you eve received about the show?

EG:  Ahhh!!! That is REALLY hard! I think I will list a couple, if that’s okay. Patti Murin from Broadway’s Lysistrata Jones told me that you can do anything if you try. In my favorite show Legally Blonde, the song So Much Better is Elle singing about how nobody believed in her, but she NEVER GAVE UP, stayed true to herself and she got what she wanted. I guess that’s inspirational to me, because the entire time we were developing this, no one believed in us. Well, we did it! 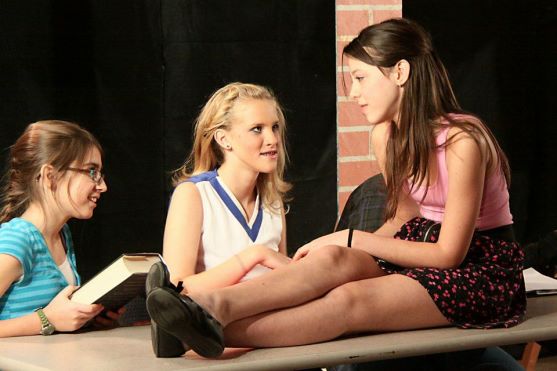 SK: How do you keep up to date with all your school work and spend time with friends while you’re doing all this work on the show?

EG:  It’s not incredibly hard. I go in to see teachers at lunch for help, I have a tutor and I work with my dad. I’m really vying to go to a performing arts boarding High School, but we couldn’t get the info in time. I would love to be in a place where your special talent counts for your grade! You just have to balance — like I’ll do the photoshoot here and then do my study session here, study lines and then eat dinner.

SK: Do you see a future for yourself in the entertainment field or something entirely different?

EG:  I can honestly say yes. Yes I absolutely can. The business is hard, but I like hard because the payoff is so amazing. I would love to do something with Disney Live! Actually, my friend does shows with them and it’s so fun watching them travel the world and do what they love! Backstage Theatre too. I love that stuff.

SK:  Is there anything else about the show we haven’t asked that you’d like to share with the readers of TheSkyKid.com? 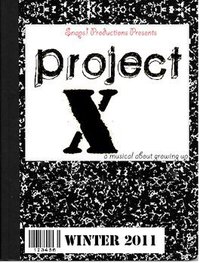 EG: I am really really grateful I am even here saying this today. I am so blessed I get to do what I love at such a young age. I am inspired constantly by other teenage celebs (like Bieber!) to never lose track of who I am in the process of getting my dream. I have learned so much about life and myself, but most importantly, how to treat other people.

We would love to bring this show elsewhere! If you want our show to come to you:  You can e-mail me and don’t forget to “Like” us on  Facebook   If you are like me and you want something bad enough, GO DO IT. DON’T LISTEN TO WHAT others say unless it’s support.

I believe in you…and always be yourself.

A great quote to sum stuff up…

“I’m standing here today…because you helped me find my way! I love you.”

— Dedicated to you Mrs. Cassatt

We wish to thank Eric for this great interview and wish he and his Project X – The Musical colleagues all the best as they continue to perform the show.  Hopefully our readers get the sense that this young man is so articulate and has a great head on his shoulders.  We predict we’ll hear much more from him in the years to come.