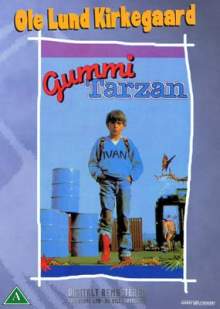 Rubber Tarzan (also known as Gummi Tarzan) is a film based on the children’s book by the Danish author Ole Lund Kirkegaard.  Though the story is aimed at children, the film can be enjoyed by viewers of all ages thanks to the messages hidden in the film’s plot.

The main protagonist of the film is a ten-year-old boy, Ivan Olsen. He is a sensible lad and a dreamer who likes to play with his kite in the nearby harbour.  At school, Ivan has trouble with the reading lessons and physical education classes and is an easy victim of the bullies.  He doesn’t have friends and, sensing that he cannot protect himself, the bullies don’t miss a day without “wetting his pants” while teasing him by calling him a wimp, unable to do anything right.

Ivan’s parents don’t do much to help him out once when he gets home.  His father shows his disappointment that Ivan is not fighting back and gives him the example of Tarzan, stating that this is how a real man should look  “Healthy, strong and noble”.  To Ivan’s father, Tarzan is a symbol of manliness . After seeing that his son is not interested in having huge muscles or impressed by the ability of Tarzan to “drag his life in the trees and swim with crocodiles” – he calls his son a “rubber Tarzan”, which hurts the self-confidence of the little boy even more. What’s worse,  the conversation between parents and son is overheard by the bullies, who now have yet another thing to tease Ivan about.

While wandering around the harbor after school, Ivan meets Ole – a daytime crane operator.  Unlike anyone else, Ole listens to the little boy without automatically disregarding his view as irrelevant because of his age. Ole understands Ivan’s solitude and decides to help the little boy regain his self–confidence. He doesn’t talk down to Ivan, but instead encourages his imagination while teaching him that everyone has something at which they excel – and it is only a matter of discovering it.

Like most coming of age films, Rubber Tarzan will make you remember your own childhood. It is impossible not to sympathise with the young prognostic of the film while watching the sincere and capable performance of Alex Svanbjerg  in the role of Ivan. The fact that the story is told from his viewpoint only adds to its charm.  The film’s director, Soren Kragh-Jacobsen, successfully captures the genuine spirit and imagination of childhood. The contrast of the small frame of Ivan and the huge, powerful machines at the harbor is another example of resourceful directing. 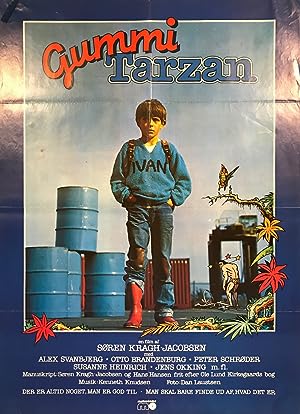