What are you looking for in a short movie? Maybe a tense, intriguing story with a surprising twist guaranteed to evoke that “Wow “effect? If yes, Tim Hyten’s 2016 short film Snake Bite has you covered.

Four boys venture deep in the woods exploring the marvels of nature. One carries a book on poisonous snakes, ensuring they can identify each species they may stumble upon. It’s an adventure with a tint of danger, the perfect ingredients for a boyish day out. All is fun and games until one of them gets bitten – and not by just any snake – but by the infamous Black Widowmaker. The guide helps them identify it, but does not offer a remedy. Time is running out for the bitten boy and a harsh choice has to be made …

The plot is both simple and complex and the story encompasses a single happening in the life of its young protagonists. As crucial a happening as it is, how it’s handled by the boys allows the viewer to get to know the characters largely through their dialogue and reactions.

The cinematography impresses with the skillful use of lighting and framing that gives the film a naturalistic, true-to-life atmosphere while high lining the action. A suspenseful short film, Snake Bite manages to grab one’s interest and holds it throughout – all the way to its original ending. 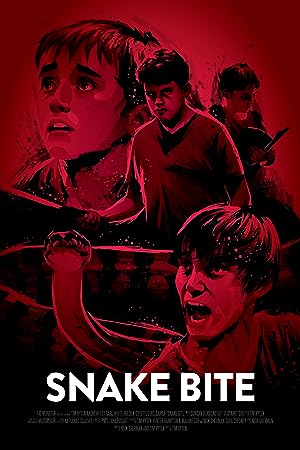