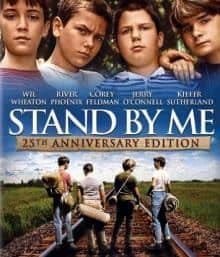 Stand By Me (1986): A Personal Reflection on the 25th Anniversary Edition

Stand By Me is one of the most iconic pieces in cinematic history and arguably the greatest Coming-of-Age film of all time. We all know the story. Stand By Me follows a simple tale of a group of four boys who set out to find the dead body of a boy that has gone missing in their small town and has been presumed dead. In my opinion, this is by far the best Coming-of-Age film ever made and undoubtedly in my top five films of all time.

Ultimately, the film is about the discovery of mortality in a world that is filled with unknowns. The poignant metaphor of the boys traveling towards death being the source of this discovery, accepting it’s inevitability but knowing that we can make our own choices along the tracks and in life.

The journey starts off as a fun, exciting adventure with the boys thinking they will get on TV and become famous if they can find the body.  But, by the end of the film, they learn the real meanings and realities of death and how close we can all come to it at any point in our mortal lives. Through their journey, they discover their own personal emotions, as well.  They learn to accept who they are and the fact that some things in life we simply cannot change. The ultimate Coming-of-Age event occurs when Gordie (Wil Wheaton) finds the courage to stand up for who HE is – and not who other people want him to be or think of him as – by pointing the gun at Ace and speaking a brilliantly delivered dialogue. “Suck my fat one you cheap dime store hood”.

I’ve never seen the Coming-of-Age of age journey displayed so fluently or metaphorically beautiful as it is in Stand By Me. 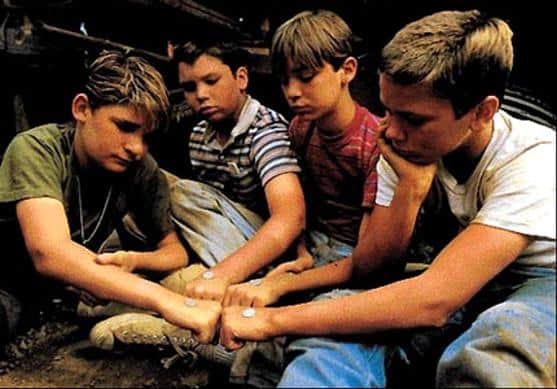 As mentioned, above, it is an extremely simple story line. But what makes this film so good and so emotionally involving are the performances from the four main protagonists (River Phoenix, Wil Wheaton, Corey Feldmen and Jerry O’Connell) and the simplicity of the progression and arc of the boys throughout the duration of the film. The performances that Director Rob Reiner was able to produce from these four young guys is absolutely astonishing as they, themselves, have said. Both Cory Feldman and Wil Wheaton, in the 25th Anniversary Edition Commentary, relate that Stand By Me was by far the most important and pivotal film in their careers because of the lessons they learnt from Reiner. And you can see this throughout the movie, especially in one of the most heartbreaking scenes to ever be put on film – the famous milk money scene in which River Phoenix poured his heart out onto the screen, with the guidance of a very talented director, both contributing to an incredible moment in film. 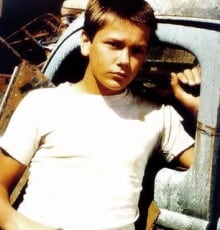 You cannot go past the raw talent of River Phoenix as well. To be able to connect with his emotions at such a young age, in the manner displayed in this film, was a testament to his ability to lock into character and explore the layers within himself to contribute and project himself into the character. Wil Wheaton was amazing too, as Gordie. Wheaton has mentioned his connection to River off screen and how the two would practice and rehearse for hours on end before they appeared on set, and how he learnt so much from this young man who was only two years older than him. Again, this is evident on screen. The chemistry between the two best friends is astonishingly real and beautiful throughout the film.

I really don’t think anyone else could have played Teddy Duchamp either. Corey Feldman was superb as the troubled Teddy, and Jerry O’Connell as the comedic relief character, Vern, was just as perfect in his role. Keifer Sutherland as Ace is a great villain as well.

I think the foundation of what makes this film great lies within the passion of Reiner. I don’t think I’ve ever seen somebody so close to a story or characters the way Reiner was (and still is) with Stand By Me. He was so emotionally invested in these boys and their progression, and you constantly hear stories of the good rapport Reiner had on the set with his young stars and the feelings he was able to help them explore. 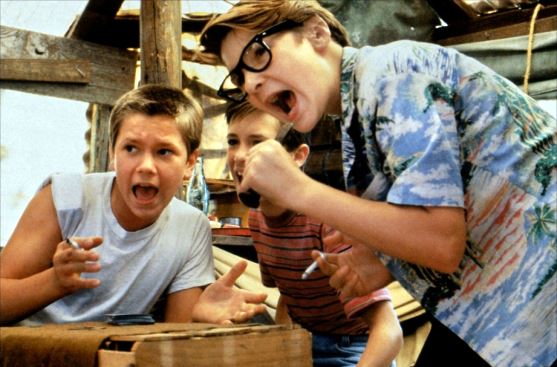 Scene from Stand by Me

The screenplay is just superb. The development of character from sequence to sequence is masterful.  And the adversaries, personal conflict and obstacles presented throughout the story, all contribute to hindering our main characters from achieving their goal.  Together, they are the ingredients of an incomparable script. Props must also go to Stephen King for the novella, The Body, on which the film was based. King, himself, has said that this is the best adaption of any of his works from novel to screen (and that includes The Shawshank Redemption).

On a personal level, this film was most likely my biggest influence toward taking up film-making. It was the birthplace for my obsession with film, mainly because of my discovery of how powerful film could be and how emotionally involved films could become with an individual. I truly saw the power of art for the first time through this film.  So, in a way, it was my own Coming-of-Age, my discovery of a new world. The film also hit close to home for me in the way it captivated the very essence of childhood and similar moments in my life.  In short, I don’t think I will ever experience again, in any film, what I felt with Stand By Me.

I must mention the extremely sad ironic ending as well. The fading away of Chris Chambers at the tree house. The heartbreaking loss of River Phoenix was one of the biggest tragedies in Hollywood history. He is one of my favorite actors to ever grace the screen and I love him to this day. May his soul rest in peace.

Stand by me on IMDB