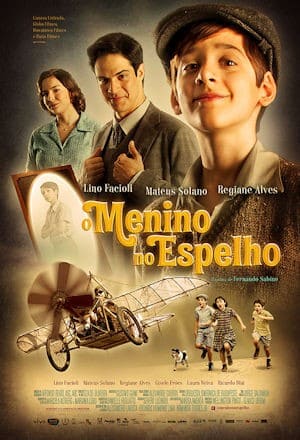 Have you ever wished that you had a double? You know, like some famous people do so they can avoid exposure to unpleasant experiences?

If the answer is “yes” and you happen to be less than fourteen years of age, you will quite likely enjoy the 2014 Brazilian film, The Boy in the Mirror (original title: O Menino no Espelho).

Based on a bestselling novel by Fernando Sabino, The Boy in the Mirror focuses on the adventures of a young Fernando (Lino Facioli – who also stars in Game of Thrones) and his gang. Fernando is quite an innovative youngster (reminding one of the ingenious ten-year-old protagonist of The Young and Prodigious T.S. Spivet), but his inventions get him in trouble with his parents more often than bringing him popular acclaim.

After a wild stunt with a homemade airplane, he gets grounded and, in his boredom, he manages to get his mirrored reflection out into the real world – a boy just like him, or maybe it is him with the peculiar name of Odnanref (Fernando in reverse). At first, Odnanref is great to have around, but soon he becomes a nuisance and may even be a danger to Fernando (both Fernando and Odnanref are played by the same actor).

If the plot summary sounds a bit childish to you, it’s because it actually is. The film is undoubtedly aimed at the very young viewer, and that’s probably the reason why so many of its scenes feel slightly dulled down to older audiences. The cast is adorable and the production design leaves little to be desired – as the costumes and settings do their job of transporting the viewer to Fernando’s world. Unfortunately, however, the dialogue is quite stilted. There are some references to a secret society, which seems to aim at establishing a military control over Brazil. But most viewers are unlikely to make much sense of it as it refers to a peculiar period of Brazilian history that most probably won’t be aware of (I sure was not).

Despite the wonderful appearance of the young cast, their acting performance is sub-par and one never gets to actually associate, sympathize and care for any of the characters they portray.

The best feature of the film is the nostalgic atmosphere it manages to convey: you know, the one of children playing outside instead of staring at a screen all day (OK, OK I know not everyone is like that). Yet, all in all, it fits well into the category of films that I like to call “time-wasters”: easy going, simple and forgettable.

The Boy in the Mirror Trailer 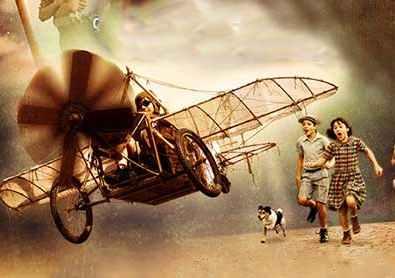 In this film undoubtedly aimed at the very young viewer, a boy manages to get his mirrored reflection out into the real world as his double.The Boy in the Mirror (2014)
TheSKyKid.comYoung talent in the movies and the arts