The writer David Cook was an enigmatic figure. He’s best remembered (albeit vaguely) for the 1990s BBC crime drama Hetty Wainthropp Investigates, although he admitted in interviews that this was not his finest creative hour. He was also the original presenter of the British children’s TV show Rainbow, first aired in 1972, although again his memory is overshadowed by his successor Geoffrey Hayes, who went on to host the UK’s answer to Sesame Street for what seemed like a lifetime to us ‘70s kids.

Ultimately, social drama won Cook critical acclaim, particularly his 1973 play Willy and his collaboration with Stephen Frears in the 1982 film Walter (based on Cook’s novel) both of which addressed issues of disability and mental health.

Pertinent to this site are Cook’s two novels that focus on childhood, adolescent development and intergenerational relationships: Happy Endings and Second Best. TheSkyKid.com aficionados will know that the latter was made into a 1996 film (the screenplay written by Cook himself) and was reviewed by Georgi some time ago.

For those unfamiliar with either the film or the book, the story is about a middle-aged, single man called Graham who has never been able to form a lasting relationship with a woman. When he becomes the primary caregiver to his elderly father, he finds himself longing for a son of his own. On a whim, he applies to become an adoptive parent.

That’s a great premise for a great story. Then enter James: a ten-year-old institutionalized boy whose mother is dead and whose father is a petty offender, in and out of jail. James loves and idolizes his absent father, and shuns the notion that anyone could take his place.

So James is put forward as Graham’s potential adoptive son. Over the course of Graham’s assessment for his suitability, we learn much about his own childhood – how he was well cared-for but starved of the emotional and physical affection that his parents reserved for each other. This has left Graham backward in his ability to be intimate with others.

Clearly, young James will have to decide whether he can trust this strange man, and Graham is going to have to face up to his own demons. But then, when Graham’s father dies…

Wo… Are we getting there yet?

The film’s great, but the novel was a more satisfying experience for me. Cook’s screenplay follows the original story closely but, like all films-of-books, it has to abridge and omit some of the more subtle aspects of the tale. Where the book really wins out, though, is in telling the story through two distinct voices: a first-person account by Graham and a third-person narrative from James’s perspective. This allowed Cook to develop the boy’s character in way that the film does not. Cook also used the technique as a vehicle for some touching humor that his screenplay lacks.

The film shies away from a particularly contentious aspect of the book, in which Graham goes into the nature of his feelings for James. It’s explicit that Graham is neither gay nor minor-attracted in his orientation, but there are occasions on which the complexity of his emotional (and physiological) response to the boy disturb (even disgust) him. This is apt to resonate with all readers who have been close to kids, whether as surrogate carers or parents, whether they dare to admit it or not.

While the novel’s chronology and alternation in narrative voices can be a tad confusing in places, it is a well-constructed piece underpinned by a compelling honesty that has stood the test of time. I heartily recommend it to anyone who has brought up or worked with pre-teen children, particularly in a social care setting. 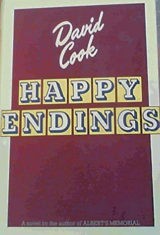 I hadn’t heard of David Cook’s earlier novel Happy Endings until I read his obituary in The Guardian. There it’s described as being “about a 12-year-old boy’s relationship with a schoolteacher,” so I was expecting something along similar lines to Second Best. That it is not; in fact the boy and the teacher never meet (at least not in the conventional sense.)

It starts in the 1950s with the story of 12-year- old Morris, who is sent to a reform school after “interfering with” a neighbor’s five year old daughter. It then jumps forward a generation and introduces Stephen, a 33-year-old school teacher with a broken marriage behind him and an unhealthy interest in younger girls.

The novel (if one can call it that) consists of a series of vignettes and episodes from Morris’s troubled childhood and Stephen’s sordid adult life. It’s clear that there is a connection between these two individuals, but its nature is not made explicit until the end when the story comes together in a way that is all too predictable (you may have sussed it already) although I suspect that this was Cook’s intention.

Technically, it’s a disjointed work which lacks direction. But it’s written in a delightful punky tone with the pen of a poet, which kept me engaged despite its artistic flaws. Morris’s characterization is excellent; in some ways a prototype of Jamie in Second Best, he is, in other ways, even better crafted. Stephen is a complex and, regrettably, credible character who elicits sympathy while leaving one feeling physically sick. As with Second Best, Cook showed the rare talent of being able to create believable adults and children in equal measure. Most authors can only do one or the other.

Happy Endings was published in 1974 and have to be read in that context. This was a pre-Savile-scandal age in which the notion of grown men harbouring desires for schoolgirls was regarded as a bit of a joke; when films like The Belles of St Trinian’s fell within the realms of social acceptability. Today, Cook’s frank portrayal of this ephebophile school teacher is liable to shock many readers, myself included.

It’s unsurprising that Cook felt empathy with sexual difference. He was an openly gay man whose 50-year partnership with playwright John Bowen pre-dated social acceptance and was still a criminal offence when they first met. Personally, I have no issue with his telling Stephen’s story in a sympathetic way (in fact I see it as a noble endeavor), but this character does more than harbour desires: he acts on them in an act of blatant abuse of both his victim and his position of professional trust. Many would agree that Morris’s transgression was forgivable, but Cook (to say the least) comes close to excusing Stephen’s behaviour too.

Nevertheless, he does so in a way that addresses several issues in a remarkably forward-looking way; that the seeds of predatory behaviour are often sown before puberty; that the justice system can be as manipulative as the offenders it deals with; that outwardly respectable people can be far from what they seem. For that, David Cook deserves commendation.

Happy Endings is a fascinating book which, subject to the caveats above, I also recommend. I managed to bag the first edition for a few quid on Amazon shortly after Cook’s death last year. Since then, demand for and consequently the price of the title has rocketed. It’s still possible to find good-to-fair copies for under £20 on Amazon UK, but with collectible editions now fetching three-figure sums, procrastination in the purchase would be ill-advised.

Second Best is widely available with used copies often going for little more than the price of shipping. It’s also available in a Kindle edition on Amazon, with a preview so you can try before you buy.

Previous article
The Amulet: A Book Review
Next article
Book Review: What Cathy Saw and other stories