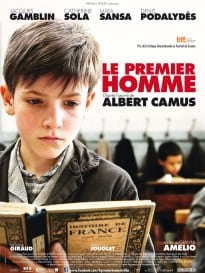 The First Man (original title Le premier homme) is a film directed by Gianni Amelio. Based on an unfinished autobiographical novel by the French author Albert Campus (he died in a car accident before finishing his work), it tells the story of a French writer who returns to Algeria in the midst of a revolution against colonization.

The weakest part of the narrative is its unnecessary length and quite boring exposition. In it, Jacques Cormery as an adult is shown giving a presentation at a university, while familiarizing himself with the changed political and social environment in Algeria.

If you can manage to remain awake during the first fifteen minutes, you will be rewarded with a good Coming-of-Age narrative as Jacques Cormery remembers his childhood days as a fatherless boy in Algeria, raised by a strict grandmother and a hardworking mother.

The plot is the result of the symbiosis of two stories: one showing Cormery as an adult and another focusing on his adolescence. The connection between them, however, is underdeveloped.  The one that focuses on his adult life, which supposedly should help the viewer sympathize with his younger self,  is uninspired and boring.

It could be that my opinion is the result of my lack of knowledge about the French-Algerian conflict. Even so, a film should educate, entertain or at least make one curious about its setting and story, none of which The First Man accomplishes.  It’s not until flashbacks bring viewers into the past and allows them to observe Cormery’s childhood (including all of the trials and tribulations that shaped his character), that the film gets interesting at all.

The angelic appearance of Nino Jouglet in the role of the young Jacques Cormery is a prime asset of the film. His looks and the naturalness he brings to the role reminds one of Manuel Lozano’s performance in the 1999 Spanish movie La lengua de las mariposas, or Andoni Erburu in Secretos del corazón ( The Secrets of the Heart). Without a doubt, the performance of Nino Jouglet  would not have been so good if it was not for the directing skills of Gianni Amelio, whose filmography includes other films with a Coming-of-Age narrative  such as The Stolen Children (1992) and The Keys to the House (2004). If only his screenwriting skills hadn’t failed him in The First Man…

The cinematography of the film impresses mostly with its immaculate framing – a silhouette of a woman sitting with the sea wildness as a backdrop, or a young boy closed in a animal wagon cage as a punishment for releasing the dogs that were locked in it…etc. Warm, but not overly saturated colors, and a nostalgic halo of lighting are utilized to achieve a sentimental and nostalgic feel of the boyhood memories of the author.

If I were to compare the narrative structure of The First Man with any other film, the 1977 Russian movie The Orphans will be a suitable candidate. Taking into account the distinct settings, the story of The Orphans manages to involve the viewer emotionally, which Director Amelio’s adaptation struggles to achieve. While it makes more references to the social inequalities that influence the life of the protagonist, the historical- political context in his adult life that is presented is unconvincing, confusing and lacking any real connection to his past.

Although overall I enjoyed the film, it doesn’t really meet  my criteria for follow-up viewings. Therefore I hesitate to extend an unconditional recommendation.