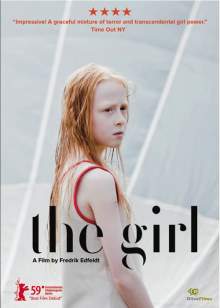 From time to time, someone will approach me saying that the majority of the films reviewed on theSkyKid.com have been presented in a positive manner and end up having a good rating and recommendation. It must be my luck (or informed choice) when picking titles to see. Yet, every once in a while I will stumble upon a film I expect to be entertaining, or at least intriguing, but am disappointed.

That’s the case with the 2009 Swedish film Flickan (The Girl). I picked it mainly because its cinematographer, Hoyte van Hoytema, truly impressed me with his work in the vampire themed Let the Right One In (Låt den rätte komma in). He achieved a unique haunting and surreal atmosphere and feel with it.  The 2010 American remake, Let Me In, failed to match it. But aside from good cinematography, a film has to have a story – something to capture the attention of the viewer.  The Girl failed to impress me. In fact, I was bored before even reaching half of its 135 minutes length.

As I was writing down my thoughts for this review, I wondered if the movie would have been more appealing to me if the protagonist was male (so that I could find common experiences …etc).  But I eventually discounted that, deciding it would not have saved the plot or made the story any more intriguing.

On first take, the plot seems interesting enough. A young girl (of eight years old) finds herself alone in her house after her parents leave for a trip to Africa (as volunteers) and the aunt who was supposed to watch over her takes off with a man. How would the girl manage by herself? That’s just the question the film attempts to answer.

The director (Fredrik Edfeldt) has attempted to objectively present the actions and events of the girl’s life, and asks the audience to be active observers of those actions and events – to see them through her eyes and to ask themselves.. “Would I have seen the world that way if I was her?”

But, unfortunately,  most of the events of her life are quite mundane and just a few scenes should have been enough to convince us that a child left by herself would feel lonely.  But that fact does not seem to be of great concern to the film maker.  There are far too many scenes of the girl sitting and staring somewhere off screen, far more than are needed to establish her feelings of isolation and loneliness.  While the film achieves a certain level of realistic representation of what would feel like for a young person to find herself in such a situation, unless one is into psychology, he/she would soon be bored with the story.

There is a Coming-of-Age element to the story.  The girl finds out about what it’s like to be a woman, about peer pressure, about how one should deal with adults, about the meaning of being sorry or being a friend – and all this in the absence of  her parents (or a guardian). But, unfortunately, that and its cinematography (Hoyte van Hoytema did not disappoint me after all) were the only two features that made the film worth seeing.