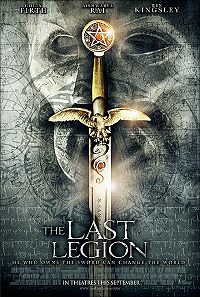 Rome – there is something about it . I enjoy reading books ( such as I, Claudius ) or watching movies( such as the TV series Rome ) about the life of the ancient Romans . I took Latin classes while I was attending high school in the US and my teacher`s only fueled my interest towards the Roman epoch.This probably is enough to explain my excitement when I found out about a new movie out there called The last legion.

The Last Legion’ is an epic adventure following the events surrounding the capture of Rome’s last emperor, 12 year old Romulus Augustus, and his imprisonment on the island of Capri.

I just saw it. Thomas Sangster plays the leading role of the last emperor of Rome – Romulus Augustus. His acting in the Last Legion is truly remarkable . (and is probably the best asset of this movie ) The storyline could have been better as at times the action was a bit predictable at times. The movies is full of references of other tales – Roman , British …etc – but somehow it does not appeared to me as a serious roman tale. Nevertheless I enjoyed watching it . The movie is full with nice fighting scenes which keep the viewer entertained. As about the battles – there is a lot more to be expected from them – its not believable that just because someone screamed out ” The tyrant is dead” – the army under his command would stop fighting.

I saw many negative reviews out there – Rotten Tommatoes for example is full of them – but my opinion is that the reviewers are a bit too harsh on the movie. Yes it is not that serious and fact based – but it has its own charm – its easy to watch and a nice way to spend a Sunday afternoon ( :