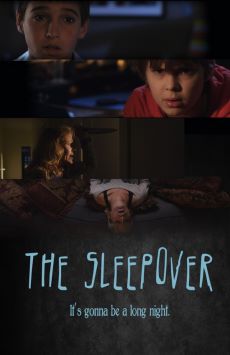 Sometimes I will choose a film to view/review after learning that it has won an award. This does necessarily only include awards given at big fancy ceremonies – but also online only ones such as the Cabin in the Woods/Lionsgate/Vimeo contest.  Of course I follow Coming-of-Age themed artworks and a film named after the universal childhood experience The Sleepover, directed by Chris Cullari, grabbed my attention.

Expecting some real chills from the horror themed short film, watching it was a rather disappointing experience. The Cabin in the Woods contest called for spoof horror films – those that mix comedy and horror.  The best example would be Keenen Ivory Wayans’s 2000 film Scary Movie. Mixing two genres together can be perceived as creative by some, yet it frequently results in just another time-waster — not capable of pleasing the fans of either genre.

The Sleepover‘s story is centered around an urban myth – a masked serial killer (you guessed right – a slasher film cliché) haunts the town of Derry (a homage to Stephen King). The existence of the masked man is known by everyone in town (the mothers even drive cars with bumper stickers that say M.A.S.K. – Mothers Against Serial Killers), but someone forgot to warn the new kid in time!

Five minutes is not much to get someone intrigued.  Yet I have seen short films that manage to — and The Sleepover is definitely not one of them. While the acting of Josh Feldman and Gus Kamp was fair, and the film started in a promising way, the ending ruined all the positive impressions that I had somehow gained from the film. Most of those impressions had come from the dialogue between the kids, which worked well as a tool to shape their characters and personalities. No doubt my personal bias toward films with no real conflict has influenced my opinion on The Sleepover,   so I urge you to see it (5 minutes is not that much to waste) and possibly prove me wrong.

Winner of The Cabin in the Woods contest.

Warning: features  scenes of violence that may be unsuitable for children under twelve