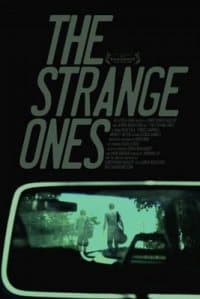 The Strange Ones,  also known as Deux inconnus, is a 2011 short film directed by Christopher Radcliff and Lauren Wolkstein. True to its title – the film is quite strange. It starts as a road movie and as the story develops transforms into suspense. Or, better said, it might transform into suspense if you let the stereotypical soundtrack lead you in that direction.  There are but three characters in the film – a man and a boy who travel to an unknown destination and a young woman who they encounter in a motel swimming pool.

There is not much more than that, though there are some subtle hints that there might be more than meets the eye.  I expected more development of the storyline – a bit of controversy or a surprising ending at least – of the kind that often transforms what would be an ordinary short film into a masterpiece. Yet, none of my expectations were met. Instead, a weak opening began thirteen minutes of weak character development,  stilted acting and boredom.

I find it hard to believe that this movie won several awards in festivals for independent cinema and am curious to know what the juries found in such merit in it. I do not usually write negative reviews but, in this case,  you wouldn’t be missing much if you skip The Strange Ones altogether.

If you have seen the film – and have a different take on it, don’t hesitate to let me know.