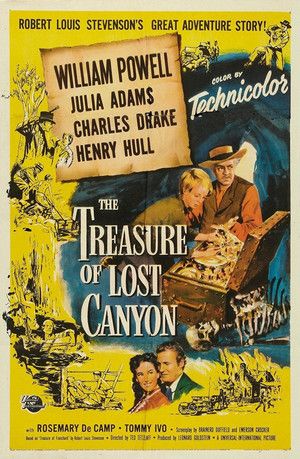 Searching for another film to watch and review, I stumbled upon an actual (but, alas, somewhat forgotten) classic of the Coming-of-Age cinema: Ted Tetzlaff`s The Treasure of Lost Canyon.

Although classified as a Western Adventure on IMDB, the film doesn’t really fit that label. It does, however, feature an engaging story about Davy (Tommy Ivo), an orphaned boy raised by traveling medicine show crooks who expect him to steal for them.

Years later, when David manages to escape his harsh life, he is fortunate to meet, impress and earn the friendship of an eccentric old gentlemen ‘Doc’ Brown. They boy and his mentor discover a hidden treasure that changes their lives…

The film’s story is loosely based on Robert Louis Stevenson’s Treasure Island. Moreover, it brings back reminiscences of Dickens’s Oliver Twist, especially in the area of character development. The Coming-of-Age motif is central to the story, which also features a strong emphasis on the value of intergenerational friendship and mentoring.

Young Tommy Ivo delivers an outstanding performance in the role of Davy, a boy who struggles to understand the adults around him and make the right choices.  At the time the film was made, Tommy was considered to be one of the most prominent child-stars of American TV, pretty much growing up in front of a camera. After his acting career ended, he became a superstar in drag racing. His convincing performance and good looks dominate the movie (especially since he is present in almost all of the scenes). His Davy is a character adults in the viewing audience care for and with whom kids sympathize.

The chemistry between Ivo and William Powell (who played the role of Davy’s surrogate father) also contributes to the film’s appeal. In an interview published in an intriguing (especially for the fans of the Coming-of-Age genre) book by Tom and Jim Goldrup, Growing Up on the Set: Interviews with 39 Former Child Actors of Classic Film and Television, Tommy Ivo states that he believes that The Treasure of Lost Canyon was his best film: “…As I say , that is probably my best picture and it has probably a lot to do with me liking William Powell. The thing I learned in that picture was that if you are going swimming with long johns on you’d better keep your behind away from the camera because it’s a perfect fit …”

For 1952, the fact that The Treasure of Lost Canyon was originally shot in color and features underwater footage is impressive. It was filmed both on location (Burry Falls in Northern California) and on the studio’s set. Even the spoiled cinema buff in me was not able to detect any major flaws in camerawork and overall cinematic presentation.

The Treasure of Lost Canyon offers a light yet intriguing tale that keeps the audience engaged. A  family entertainment suitable for viewers of all ages.  I don’t hesitate to extend my recommend for the film.