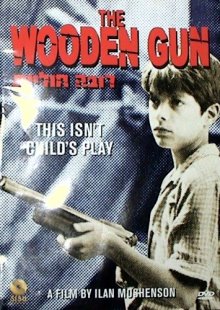 Reading the synopsis of Ilan Moshenson’s 1979 film The Wooden Gun (original title: Roveh Huliot) can convince the reader that the film is filled with ideology. That’s probably why I was initially skeptical about the Israeli film. Yet I decided to give it a chance – and discovered that The Wooden Gun is much more a Coming-of-Age tale than a political fable.

The story is set in Israel shortly after the end of World War II. Two rival bands of boys wage their own war for the control of the backyard. It may seem like a childish game to the adults – but the members of the boyish gangs (aged eight to twelve) take their battles seriously. They compare their battles with the real ones from history, but that doesn’t convince the adults:

“…You can’t take example from the real wars for your childish ones. Your wars are dangerous and totally unnecessary…” argues the father of the  main protagonist Yoni  Schreiber (Arik Rosen).

Despite that voice of reason kids will be kids and, as wars are waged to be won, Yoni cannot give up his battles.  He’s driven by the desire to prevail and also to get revenge for the broken hand he acquired during a previous battle between the gangs.

One can compare The Wooden Gun with films such as War of the Buttons (2011) and I Declare War (2012) due to its focus on rivalries and revenge. Additionally, the film’s narrative reminds me of Lord of The Flies (1990) as it also bears an important message about human nature deeply integrated in its seemingly simple development.

Most of the cast of the film is comprised of non-professional actors who, aided by Moshenson‘s very competent directing, deliver a convincing story filled with realism. It is not hard for the viewer to either identify with the one of the characters or to recall similar battles in his own childhood, which we have all experienced to the horror of our parents.  But then again, they had their own.

While watching the film, I was astonished by how many similarities between the childhood behavior  in Israel being portrayed in The Wooden Gun and the way kids behaved during my own childhood in Eastern Europe. We also had gangs, and we also played at war, mostly by launching paper cornets from metal or plastic tubes (Spitwad). I have so many great memories of those days that I am afraid, for me, they may have diminished the overall message that The Wooden Gun intends to deliver.

The Coming-of-Age nuances of the film are best found within the character development of its main protagonist Yoni. His growing understanding and awareness of the possible outcome of their games and the reasons that started them in first place is pivotal for the film’s message. The young Arik Rosen successfully captures the essence of being 10-years-old and trying to make sense of life, through experiences and reflections.

The viewer who seeks symbolism and political and social messages (or social criticism as many reviewers call them) will be able to find those things by spending time reflecting on the film’s events. On the other hand, other viewers looking for a charming and intriguing boyhood story, won’t be disappointed either.

The Wooden Gun was released in the same year as The Hedgehogs’ War (a classical Coming-of-Age film from Bulgaria). Both films can be enjoyed by children and their grown-up parents.

The film is available in an English-subtitled version and I don’t hesitate to give my highest recommendation to this intriguing piece of Israeli cinema.

Clip from The Wooden Gun