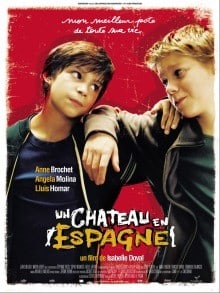 As soon as you look at the cover artwork for Isabelle Doval‘s film, Un Chateau en Espagne (see picture at left), you will identify its central theme – friendship.

The protagonists of the film are Maxime (Jean Senejoux) and Esteban (Martin Jobert), two 11-year-old boys who have grown up together in Paris. Maxine is a French boy while Estaban is the son of Spanish immigrants. They are such good friends that they feel like brothers. When Esteban’s father decides to take his family back to Spain to pursue a professional opportunity, the boys are faced with a terrible reality – permanent separation.

Maxime is determined to do anything in his power to keep his friend nearby. Knowing that Esteban is passionate about acting, Maxime signs his friend up for a musical audition. The boys train in secret, hoping that if Esteban gets the lead role, his parents may reconsider their return to Spain.

Un Chateau en Espagne has a simple storyline and avoids overly dramatic scenes (except for its finale). Yet, one can’t help but identify with its young protagonists. We have all had and remember a best friend from our childhood days. Like our first love, that special friendship seems to stay a part of our consciousness forever. Touchingly, mixing in humor and joyful scenes, Isabelle Doval manages to recreate the feelings of having a best friend.

Both boys play their characters with absolute naturalness and most of their interactions feel like improvisation. The musical score, featuring contemporary vibes and naturally a Spanish guitar, feels a bit overemphasized at times — so much so that the movie almost seems like a TV production instead of a full-length feature film. This undermines the effect of some scenes, but overall, doesn’t result in a lousy viewing experience.

Un Chateau en Espagne isn’t a masterpiece, but its story is pleasant enough to keep you entertained — one of those feel-good movies that are perfect time fillers. The film will bring back some lovely memories from a viewer’s past as a bonus. Unlike most American productions that focus on true friendship, Un Chateau en Espagne avoids clichés as much as possible and ends with a realistic finale. Recommended!

PS: The film’s title, Un Chateau en Espagne, makes a reference to a typical French expression “des châteaux en Espagne bâtir”  (build castles in Spain) that is used in any situation to refer to unrealistic plans or dreams.