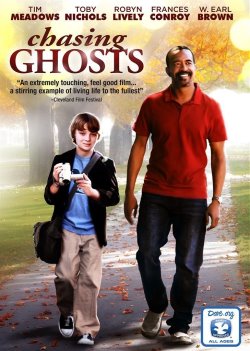 It can be quite a challenge to address the subjects of death and grief when children are involved. Yet we have seen it done in quite a few Coming-of-Age movies, as facing death is an inevitable part of everyone’s rite-of-passage experience.

In Joshua Shreve’s 2014 film Chasing Ghosts, the young protagonist, 11-year-old Lucas Simons (Toby Nichols),  is obsessed with death. Lucas develops his unusual (for someone so young) obsession after his brother (who is also his best friend) loses his life in a traffic accident.

To cope with his grief, the boy (an avid film fan and aspiring filmmaker himself) finds a strange hobby – filming funerals at the local cemetery. One day the boy catches a ghost like presence, the recording of which swiftly becomes viral on the YouTube channel where Lucas shares his cinematic efforts. The success of the video turns Lucas into a sort of local celebrity, as TV channels compete with each other to have him on their shows.

Meanwhile, Lucas is excited to meet with local author Chris Brighton (Tim Meadows), who recently underwent a near-death experience and has subsequently released a book on the importance of enjoying every moment of our lives – living in the NOW. Boy and author strike up an unusual friendship as Lucas finds in Chris a role model who is always ready with advice — not only of how to deal with his newly attained celebrity status, but also with the typical worries of adolescent boys (young girls).

Despite the intriguing premise and the extremely good actors in the aforementioned lead roles (the supporting cast delivered a mediocre performance), Chasing Ghosts struggles to to grab the interest of its audience.

One is left with the impression that director Joshua Shreve was not quite sure until the very last moment what kind of movie he wanted to make:  1) a dark one about death, 2) one that was primarily a Coming-of-Age film with a young boy who learns how to deal with his fears and gain an understanding of what matters in life, 3) a pre-teen comedy featuring school dances and first heartthrobs or 4) a story of an inter-generational friendship in which a wiser, older guys helps his younger buddy shake off the shyness and enjoy life. Any of these variants would have been a good film on its own, but mixing them all together ends up causing nothing but frustration…frustration that eventually leads to boredom.

The film is not a total waste of the time, however, as there are scenes (especially the final one) that really make sense and transmit a message. To the point that I’m am almost ready to believe that if all of the unnecessary “stuffing” put into some scenes was edited out, Chasing Ghosts would make a wonderful short film.