“The sea is beautiful because there is always a lighthouse hiding somewhere.” 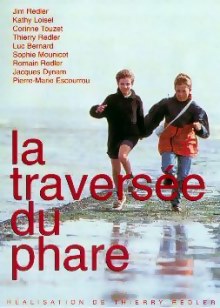 Troubled youth, a popular young actor in the lead role – that about sums up all I knew about the 1999 Thierry Redler film La traversée du phare (Crossing the Lighthouse). With such a significant unawareness, it didn’t come as a surprise that this French made-for-TV film totally exceeded my expectations, ending up being one of the best Coming-of-Age films I have ever seen.

Narrated part way in the first person by one of its main protagonists,  10-year-old Eric,  the movie delves into the wonderful world of youthful emotions and first-love.

Following the demise of his mother, Eric’s grief causes changes in his behavior, quickly earning him the label of “a difficult kid” which, in turn, causes him to spend time in various foster homes across France.

After the last change of Foster homes, Eric finds himself in a small sea side town in southwestern France. At his new school, Eric gets acquainted with a boy who addresses him in a friendly manner — unlike most of his new classmates.

One day, during a dangerous voyage to the nearby lighthouse, Eric discovers that his new friend is really a girl – Marie.  Fascinated by her wild side and compassion, Eric befriends her and it doesn’t take long for their feelings to transform into love …

As I write this, I can imagine some of you smirking while reading my words – maybe thinking to dismiss this film as  merely one portraying puppy love.  After all, what emotion can such youngsters really experience…right? Wrong!  For the love portrayed in La traversée du phare and the intensity of feelings it brings to the viewer is not only poignant, but essentially can serve as a model for young and adult audiences alike.

Thierry Redler took a distinct approach for the character development in his film. While we learn about Eric predominately from his thoughts and observations, the character of Marie is developed mostly from the conversations of her classmates and professors. From them we learn that her tomboy appearance and attitude are often considered disturbing among conservative parents and school authorities.

Eric and Marie are both “outsiders” due to their previous life experiences  (abuse, intolerance, lack of trust, loss of parents…etc.).  Perhaps this gives them an affinity to each other. Then they fall in love – only to be separated…

The narration is mostly restricted – revealing information only as the kids themselves learn it. This provides for a suspense that kept me glued to the screen for the entire movie’s duration. Eric’s thoughts reveal his inner subjectivity: hopes, fears …which helps the viewer connect to his character.

The director skillfully uses repetition as a storytelling device – highlighting the emotional power and determination possessed by the two 10-year-old protagonists.

The film features ample symbolism – the light house as place of security and guidance, the sea as freedom and the classical novel by Antoine de Saint-Exupéry – The Little Prince. The novel, given as a gift to Eric by Marie, is essential to the story development of the film as it is equally poetic and makes several remarks about  the strangeness of the adult world – especially in the unwillingness of most grown-ups to recognize that love can be as powerful at a young age as later in life. Eric’s love for Marie is a driving force of the movie, just as in The Little Prince the prince’s love for his rose is the driving force for that novel.

“One sees clearly only with the heart. Anything essential is invisible to the eyes”

Eric understands the meaning of this quote from The Little Prince. He and Marie are special to each other as she has tamed his heart.

I was truly impressed by the performance of the young Jim Redler in the role of Eric. One could literally read his emotions on his face and in his eyes – naturally aided by close up shots that were utilized to draw attention and intensify them.  I find it impossible to remain indifferent to his experiences and, what’s more, because of the determination, projected toughness,  courage and emotions of his character,  I felt deep respect for the little Eric. In a way, I stopped thinking of him as a child. Maybe that’s why, when he finally broke down in one of the scenes, my tears joined his.

La traversée du phare manages to evoke strong emotions, but it does so in a natural manner – avoiding the manipulative sentimentality so frequently found in love stories with adult protagonists. With the intense happenings, dynamic characters and powerful story the film could be characterized as a Coming-of-Age drama.  This deduction is strengthened by the melodramatic piano score – suitable for a tragedy – which indeed makes the viewer anxious over the final outcome of the beautiful love story of Eric and Marie.

Montage featuring the original soundtrack from the movie: