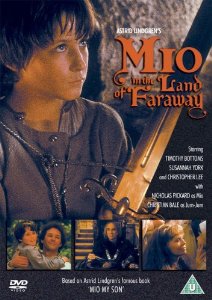 Who doesn’t like fairytales? Having grown up with Astrid Lindgren’s novels along with her characters Pippi Longstocking and Karlsson (On the Roof), I was curious to see if Mio in the Land of Faraway — an adaptation of her novel Mio, My Son — would awake in me a bout of childhood awe, wonder and a thirst for adventure.

Mio in the Land of Faraway has managed to wrap itself in a cult like aura thanks to the acting debut of Christian Bale (right before his big role in Spielberg’s Empire of the Sun) and its theme song (composed by two former ABBA members).

The hero of the film is nine-year old Bosse (Nick Pickard), who struggles for the love and acceptance of his adoptive parents. Nowadays, viewers will undoubtedly draw parallels with the Harry Potter character.  Bosse’s wish to find out the whereabouts of his real father comes to life when a fairy godmother helps him to get to the Land of Faraway. Bosse’s father is the king of that magical kingdom and from him Bosse finds out that his real name is actually Mio and that he is a prince whose arrival has been expected from every living creature in the land.

The young prince Mio’s happiness is short lived as he learns that a dark force threatens the Land of Faraway. Kato is a knight with a heart of stone and is so evil that he has abducted and enslaved many kids from Mio’s newfound Kingdom. Mio meets a friend – Jum Jum (Christian Bale) the son of the royal gardner — and together the young boys embark on a journey to kill the evil knight who lives beyond the enchanted forest in the countryside…

Admittedly, Mio in the Land of Faraway features a lot of common themes with other fantasy films aimed at children such as: The NeverEnding Story, The Chronicles of Narnia and even Harry Potter. As a result, one shouldn’t really expect many surprises as far as the plot development is concerned.

The best feature of the film is certainly the charismatic appearances of Nick Pickard and Christian Bale in the lead roles (on screen for almost every scene), even if most of their lines end up sounding somewhat silly and naïve. This results in some frustration for the viewer as, having seen other films with young characters in a fantasy (medieval alike) world such as Last Legion (starring Thomas Sangster) and Tomas and the Falcon King (2000), I’m sure that age is not necessarily linked to naïveté and “easy way out” solutions. But then again, one must keep in mind that the target audience of Mio in the Land of Faraway are young kids (10 and below) who may not mind the silliness in the dialogue. (example)

If one sees the film while still a kid, it’s story can be simply perceived as a splendid fairy tale with inspiring characters who are close to one’s own age. Yet a grown-up may find the simple story bursting with symbolism and metaphors — turning the Land of Faraway into a product of an imaginative young mind wishing for a better life and acceptance. (I even took it as a tragedy myself).

As far as the adventure factor goes, the narrative in Mio in the Land of Faraway is somewhat disappointing — especially when comparing it with more recent fantasy films such as the Danish 1977 movie Eye of The Eagle. That and the predictability of the plot made me check my watch several times while watching the film, which is never a good sign. Some production design errors, such as the glass windows on the King’s castle in the Land of Faraway, also bothered me once I noted them.

As a result, despite the cult like status among those who have watched the film as children, I can’t fully recommend it. Yet the film is likely to excite the very young viewer. 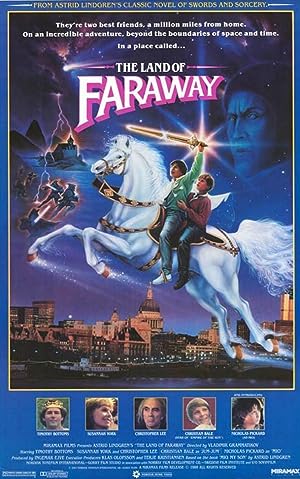 Mio in the Land of Faraway (1987)
99 min|Adventure, Family, Fantasy|01 May 1988
6.3Rating: 6.3 / 10 from 5,499 users
A lonely boy who is transferred from his dull life with his adoptive parents to the land where his real father is the King. In that country, he sets out on a quest, together with his new friend, to destroy the evil Knight Kato.
Director: Vladimir Grammatikov
Creator: William Aldridge, Astrid Lindgren, Andrey Ivanov
Actors: Nick Pickard, Christian Bale, Timothy Bottoms
Previous articleThe Devil’s Playground (1976)
Next articleTo See The Sea (2014 )