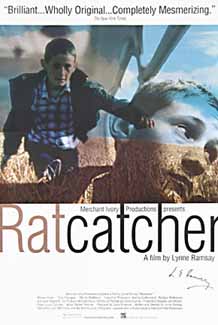 I saw the movie yesterday despite the fact that it was in my collection for over a year.  I really liked it – even if I have to admit that I somehow missed the ending. Ratcatcher is a movie produced and filmed in Scotland  and I do have an affection to such – especially to the accents of the actors and their general appearance . The movie has quite a few uncomfortable scenes – but at the same time they do not get as far as to call it disturbing .

The story is based in the 70`s when a nine week strike of the garbage collectors leaves  Glasgow covered with trash . Its everywhere and so are the rats – but those things only set the place or the overall atmosphere of what the viewer is to witness .

The main character is the 12 years old James . Strangely enough we are introduced to it quite slowly – as observes trough the eyes of another boy who watches him playing nearby the dirty waters channel . This filming technique is used quite a lot during the movie and somehow it contributed to the impact of the scenes as we saw them trough the eyes of different characters .

We don`t really know anything about James – so when he causes something terrible to happen our opinion about him is definitely not that positive.  James is hunted by gilt but decides to keep silent probably afraid of the possible consequences of his actions .  As the movie revolves we are getting more and more familiar with the environment in which James lives and about him. I like these kinds of movies as watching them almost feels like you are fitting together a puzzle. To be more precise the movie offers some  excellent character development   combined with first class acting.

The movie is packed with an excellent actors from all ages – but the real focus is on the young cast especially the excellent representation of the lead character, which would never turn out so well without the perfect acting performance presented by William Eadie. It is his acting that makes the Ratcatcher  a powerful coming of age drama that I highly recommend .

The camera work is first class as well and speaking for cinematography the fact that the movie`s director used to be a photographer herself . The compositions in the movie is excellent and in fact some screen shots of it would have made an excellent documentary photo exhibition about life , boyhood  and poverty.

Similar movies : My Life As a Dog