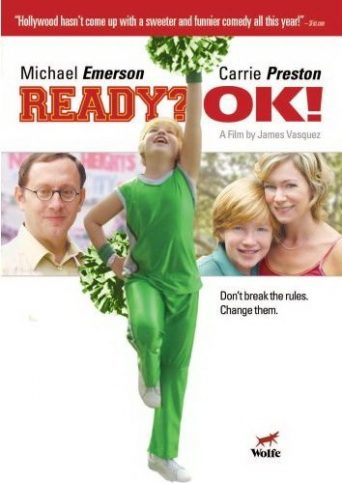 Ready? OK! is a fun and inspirational film.  I really enjoyed watching it as the film has influences from two of my favorite films: Billy Elliot and But I Am A Cheerleader.  This movie follows the adventures of 10-year-old (almost 11) Josh Dowd (Lurie Poston), who is an energetic young boy studying in a rather strict private religious school and is on its wrestling team.  But Josh is not that interested in wrestling.  He would like to join the school’s cheerleader team and wears a homemade button on which is  the face his favorite varsity wrestler.

School officials do not approve Josh’s attempts to join the cheerleader team. He is told to ” forget all hopes that he would ever join the team”. But then, as the movie continues, the viewer sees how really cheerful the young boy is as he doesn’t give up hope.  He says “Hey! I’m not trying to break the rules – but change them!”. Wouldn’t it be wonderful if more people had his attitude?

The character development in the film is quite well accomplished,  as we gradually learn a lot of new things about Josh, his mom, uncle and even his “artistic” neighbor. Carrie Preston plays the challenging role of the overworked mom, who doesn’t really have time for her son.  She worries that she might have troubles at her job as people could decide that she is not “what they are looking for”.  She also frets that her expectations of her son are not being fulfilled and her confusion makes her admit that she just don’t know what to do…or say about him. That is until she is told by their neighbor that, to him,  “Josh is  one of the smartest, funniest, most sensitive little boys he has ever had a pleasure of knowing” and that she is missing an amazing opportunity of being there for him, helping him to be himself – not what others are expecting him to be.

My own experience with cheerleaders is from the time I was studying in the US.  That’s the very first time I saw cheerleading teams, and the team at our school was the bomb ( I had a bit of a crush on one of the girls on the team ). And we also had our own Josh (of course his name was different),  the only boy on the cheerleadering team. And, yes like the boy in the movie, he got teased for it.  I have to  I admit that I admired him, as sometimes it takes some guts to be able to stand up for yourself and do what you like to be doing.

While Ready? OK!  was created to be more funny and entertaining than serious,  I believe that many will discover something of  themselves in the film.  Family, acceptance, determination  and love are all mixed together in 91 minutes,  which I believe you’ll find quite enjoyable.