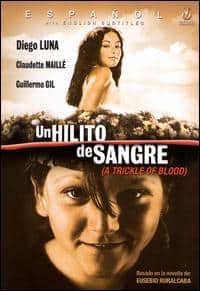 “Hilito de Sangre” will give you a ride through the imagination of a 13 year old (Diego Luna) who needs to do something with his vacation time. The film is based on the Eusebio Ruvalcaba novel by the same name.

(It sort of reminds me of Children’s Island : Barnens ö) of course Stockholm and Mexico City are completely different places. But if you have seen “Barnens ö” you can find some similarities.

During his daily, nightly and underground journey he will talk and give advice to himself, get in trouble, find enemies, friends and also he’ll find the sexual awakening of his teenager years.

You’ll find everything on this movie fights, drama, romance and some good laughs. At some point the movie can go totally wachy, but is part of the fun.

I  wasn’t expecting anything from the movie, but it was good since I get to laugh and remember when I was that age.  On a side note Diego Luna was a better actor back then, than today that he’s like thirty something.

Wish I can say more but I will ruin the movie for all the fans of Diego or the ones that are really interested in the plot of the movie.